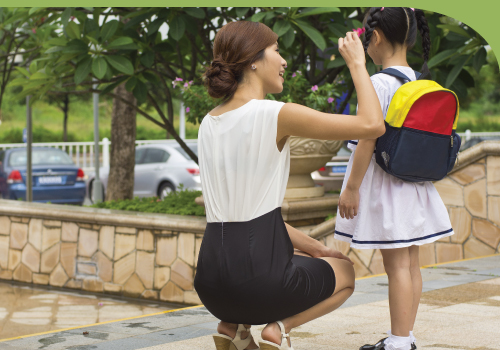 However, a survey conducted among Brazilian working moms showed that the children’s age has a direct impact on the level of a mother’s uneasiness in balancing work and family.

Fifty-nine percent felt it was most difficult when the baby is under 12 months old. The symbiotic relationship between mother and infant during this period, and the need for a 24-hour-care, are likely two factors that lead to this high percentage. Following that, 18 percent chose the period between one to two years-old. And 11 percent claimed the most difficult phase to balance work and family is when kids are over 11 years of age, possibly due to the concerns that often arise during teenage years.

The first two years of childhood development are intense in many ways. Lots of changes occur in the family and parents do not want to miss the first steps, first words and other major milestones. Not being present for your child’s first steps can be very disappointing, which is one of the reasons mothers in Brazil, as well as in other countries, opt to stay at home during the first months of the baby and quit their jobs.

Another concern pointed out by some Brazilian working mothers is related to a baby’s incapacity to express verbally if something went wrong while the mother was away. In Brazil, it is very common that babies stay at home with a nanny while the mother is working. It is cheaper than in the US to have a full time nanny (note that full time means really full time in Brazil, even sleeping at the family’s house 6 to 7 days a week!). Although it is very handy to have this daily help, it is also a source of concern for the working mother: “Is the nanny treating well my baby? Is she feeding the baby correctly?”. It is not rare to find cases where the mother hires a nanny but asks the grandmother to stay at the family’s house to supervise the nanny while she’s away.

In fact, according to the same research, one-fourth of the working mothers count on grandparents to take care of their children during working hours.

It is interesting that when the child is between 2 and 10 years of age the working mother’s worries decrease. In many cases, this is also the period when the woman’s career is progressing and she is assuming more responsibilities and moving up the corporate ladder. The child is no longer a novelty in the home and the family has already established a daily routine. The “calmer” period opens space for the woman’s career development.

But the peaceful period ends quickly and the worries are back when kids reach adolescence. Many women believe that their presence is very important during the teenage years, when “external” threats are around, like drugs and alcohol. Few women quit their jobs during this period but their focus is split between home and work. For some, an extra energy is needed to keep the career in a smooth pace.

Although these numbers could vary from country to country, I believe that the three phases could be seen in other parts of the world. Working moms from India, Italy, Brazil and the United States are impacted similarly. Assuming that this is true, companies should consider designing programs for women’s career development with children’s age in mind.

More flexible hours? Child care benefits? Psychological counselling? A mother with a 12-months baby could have a different work program than a professional with a grown-up kid.

I do not know if this is viable, but it’s an idea worth being discussed by companies in order to attract, retain and promote women into higher positions.