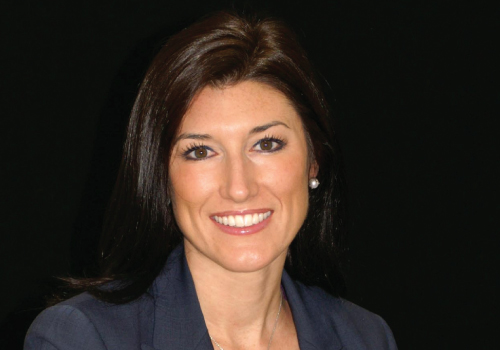 Making a Way for the Next Chapter

“When I was seven or eight years old,” she remembers, “I sent in an audition tape for Star Search.”

McCarthy grew up singing and was ready to share her talents with the world, so she recorded herself on a big, black cassette tape and sent it to the show’s producers.

“A couple months later I got my first rejection letter,” says McCarthy.

But, no is just another step towards yes.

The Scranton, Pennsylvania native is one of The Coca-Cola Company’s fast-rising stars.

“They’re little drops that add a sweet flavor to your water,” says McCarthy. “We are working with the brand team on how to bring that to life, how to connect with our customers.”

Her career with Coca-Cola began in Chicago, where she was hired out of college as an Account Manager.

“My friend and I decided we were moving to Chicago after graduation,” she recalls. “I met with about 10 companies and Coca-Cola offered me an Account Manager position.”

Then, in Atlanta she worked on the Evian, Dasani and SmartWater brands, taking on the role of Director of Hydration – a title that her Emory MBA classmates felt was so special it deserved an award.

PINK recently sat down with the busy Emory MBA and bride-to-be (in less than a week!) to find out how her MBA contributed to her advancement and how she plans to define success in the future.

Little PINK Book: You have an undergraduate degree in special education. What turned you on to business?

Bridget McCarthy: Both of my parents were great mentors to me in different capacities. My father was an executive in the food service industry for 30 years, so I grew up talking about business a lot.

I love teaching, but being in a business-centered family directed me to think about business while I was in college. Much later in my career, after Coke, I’d like to take what I’ve learned in the business world and teach at an educational institution.

LPB: What is the best business advice you’ve ever received?

BM: “Get your MBA,” that’s what a successful businessman told me over dinner about three or four months into my move from Chicago to Atlanta.

I was thinking about it but, when he said it, it became more real. I knew it was something I needed to do. I was just kind of faking it until I made it.

It was definitely one of the best decisions I’ve made in my career.

LPB: What type of MBA program did you enroll in?

BM: I chose the modular format, which took me out of work for a week at a time. The company was very supportive, especially my mentor Julie Francis.

For 22 months, I delegated responsibilities to my team that they would not have had otherwise. They were able to learn a lot. And, the time crunch really helped me prioritize. I stopped doing things that weren’t worth my time or didn’t add value to the business.

LPB: What is the biggest risk you’ve taken for your career?

BM: Moving to Atlanta was big for me. I had been with the company for six or eight years in Chicago and I was very comfortable working there.

Leaving everything I knew to move across the country to a city where I knew, maybe, two people was a little scary.

LPB: How would you describe your leadership style?

BM: One of a coach. I am always thinking of ways to help develop others and help them get to the space where I am mentoring them from.

I get the opportunity to mentor half a dozen women at Coca-Cola and two students at Emory. I love helping them work on large projects and being able to discuss their goals from a developmental standpoint, because, at the same time, I get to reflect on myself. It’s as much, if not more, of a benefit to me as it is for them.

One woman, in particular, is working on branding herself – what her elevator pitch is and who she wants to be as a leader. I really enjoy helping her identify her passions, where she feels most confident, when she feels least confident and how to put herself in situations that may be a little uncomfortable.

LPB: What is your biggest weakness as a leader?

BM: I’m a bit of perfectionist – with a very high sense of urgency. I am working on allowing my team members to succeed themselves and not try to do everything for them.

If it looks like someone is struggling a little – and whether or not they miss the mark has no significant impact on the company – it’s OK to let them make the mistake. They will learn more from making a few mistakes than me doing everything for them.

LPB: You’re getting married this month. How did you manage to plan a wedding and hold things together at work?

BM: It’s been great and has certainly brought our families closer together. My fiancé, Geoff, and I have had to make quick decisions about things we never discussed before.

(She laughs) But, I wouldn’t want to be a wedding planner.

LPB: How long did it take to find your dress?

BM: The seventh dress I tried on was it. When I tried it on, I really liked it. But, it was when the woman went the whole nine yards and brought out a veil and bouquet of flowers – she put the whole thing together for me. And, I was like “This is it!”

I told my sister to cancel our next appointment and we went to lunch.

LPB: How do you define success?

BM: I think the way I define success right now will change.

LPB: Do you plan to have children? How many?

BM: That’s the plan. Between two and three is the number right now.

LPB: What do you think is the greatest obstacle facing women today?

BM: We can get in our own way sometimes. Obstacles are not exclusive to women.

It’s really taking that leap of faith, taking that risk when you don’t know if it’s going to work or not, in order to be successful. It’s getting outside of our own way and being decisive, building up our self-confidence so that we feel ready for the next opportunity.