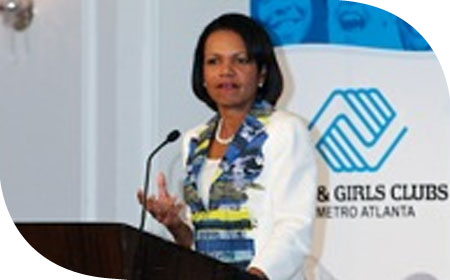 Raised in the segregated South, Condoleezza Rice is no stranger to being the only African American woman in the room. First, as a Soviet foreign policy expert, then the first African American female Secretary of State. She got there by being “twice as good.”

On her watch, several Middle Eastern agreements were successfully negotiated, most significantly, the Israeli withdrawal from the Gaza border in 2005. Rice is currently a professor of political economy at Stanford University.

Little PINK Book caught up with Rice, whose unusual first name is derived from Italian for ‘with sweetness,’ at her keynote speech for the Boys and Girls Clubs of Metro Atlanta. Find out how she excelled by finding mentors who didn’t look like her and how her passion for politics found her.

Little PINK Book: Has it been tough to be a woman in a majority-male office?
Condoleezza Rice: If by the time you’re Secretary of State you let somebody treat you badly because you’re a woman, it’s your fault – not theirs. You’ve got plenty of arrows in your quiver. If you are willing to let somebody degrade you, or not take your advice seriously, or treat you badly because you’re a woman – oh come on! It’s time women who have reached that position in life, realize they don’t have to be taken care of. They need to take care of themselves! Women have to be very careful not to allow the infantilization of other woman.

LPB: Why are you so passionate about women’s advancement?
CR: If I could wave one wand, I would empower women, because if you want to do something about population explosion, empower women and they will not have their first child at 13, and they won’t have 10 of them. If you want to do something about human trafficking, empower women and they won’t end up in brothels. The empowerment of women has a powerful effect, because if women are badly treated in a society, it is a proxy for something else going on in that society. Women’s empowerment is not just a nice thing to do but a necessity of good foreign policy.

LPB: What do more women need to master to be successful at work?
CR: Search for role models you can look up to and people who take an interest in your career. But here’s an important warning: you don’t have to have mentors who look like you. Had I been waiting for a black, female Soviet specialist mentor, I would still be waiting. Most of my mentors have been old white men, because they were the ones who dominated my field. Never let anybody define what you are going to be by how you look. They have no right to do it!

LPB: How did you find your passion for politics?
CR: If you’re not careful your passion will find you. I was supposed to be a concert pianist. I could play piano from the age of three; I could read music before I could read. Then I met prodigies who could play from sight what had taken me all year to learn. I realized that career was not for me. In college, I walked into an international politics class taught by Madeline Albright’s father – and all of the sudden I knew what I wanted to do.

LPB: How did you overcome racial boundaries?
CR: Growing up in Alabama, my teachers insisted that you not think of yourself as a victim. Their mantra was: “You have to be twice as good.” And it wasn’t said as a matter of debate; it was said as a matter of fact. I say to my students [at Stanford University], many of whom come from good privileges, “you have to be twice as good” is not a bad mantra for anybody. Because if you’ve worked hard enough to believe you are twice as good, then you are not going to be thrown off course by almost anything.

LPB: What’s the best advice you would give career women?
CR: There have to be multiple messages. Young women need to find mentors to recognize their talent. But [women also must] recognize that sometimes you have to take certain steps into your own hands; you can’t wait for someone to solve the battles for you.

LPB: How do you recover from mistakes?
CR: Be open to the fact you might have made one. Then decide what you’re going to do about it. But most importantly – once you’ve realized you’ve made a mistake, you can’t dwell on it. If you spend all of your time looking back, then you will not focus on what you need to do moving forward. As a leader, empower others when they’ve made a mistake, to tell you about it. If you create an environment in which people are afraid to say, ‘we’ve made a mistake here,’ then you’re not a very good leader.

LPB: What’s your success secret?
CR: I can trace much of my professional success to my upbringing in segregated Birmingham, and to the values and work ethic I learned from my community. My parents insisted on excellence without excuses. I have carried this message with me throughout my life, and it has fueled my determination to excel.

LPB: What do you think is the biggest concern for professional women now?
CR: We are making great strides for women in the workplace but there is still more we can do to achieve full equality. Glass ceilings will be broken because there are people willing to break them. To be successful in the workplace, I tell young professional women: define yourself not in terms of the ceiling that you might meet, but in terms of what you want to do. Plan how you’re going to get good enough at it to make a case that you ought to do it. Then go for it!