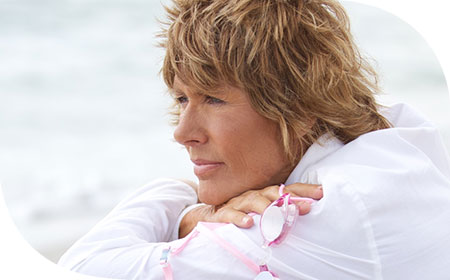 The Dangerous Swim to Success

What woman gets back into the same water where a year earlier she is thrown off course by strong currents, risked being eaten by sharks and nearly killed by the deadly Box Jellyfish?

She’s on Day 3 of a 103-mile attempt to swim from Cuba to Florida, sans shark cage.

She’s best know for awe-inspiring feats in the water, including the fastest swim around Manhattan Island and stroking the longest swim in history, back in ’79. Nyad, who’s in four Halls of Fame also owns her own business – BravaBody.com, a fitness site for those who want to be “Fit and Fabulous at 50+!”

Here she tells Little PINK Book why small things are really big – a song, friendship, a jellyfish the size of a sugar cube – and what gives her the push to do what’s never been done.

Little PINK Book: What will keep you sane on this 60 hour long swim?
Diana Nyad: I have 80 songs in my brain. I’m counting, long, long counting goals that take hours to get to in English, then German, Spanish and French. In the middle of the dark night I’m thinking of Neil Young. When I hear a Bob Dylan song in my brain, I can hear every harmony, every guitar strum. When I sing that same song 2,000 times that’s six hours and 20 minutes of swimming.

LPB: What made you so driven?
DN: I was sexually molested as a child. There is something inside, a little fragile girl that says: ‘I need to be special, more than abused, afraid, humiliated.’ And I am going to be more than that! As I’ve gotten older, I don’t operate out of that but in my 20s, 30s, 40s and early 50s, I was constantly pushing to be special.

LPB: How do you motivate your team?
DN: I want them to feel happy in their personal life. Do what turns you on in life. You have to have a passion for it. If you’re just in something because it’s your mother’s idea or for the money, though the paycheck is hard to turn down, get out of it. I know so many miserable, rich people. You’ve got to love what you’re doing.

LPB: Does anything scare you?
DN: I sit around tripping out about all the fears. ‘Will I have the body and mind to stay in there, even if the sharks or jellyfish don’t get me?’ I’m afraid of everything. No one has ever swum these hours. The weather, the Gulf Stream – they are all daunting factors. They showed me pictures of 20-foot sharks. You’ll encounter a rogue shark that hasn’t eaten in two or three weeks.

LPB: You swam two-thirds of the way last year but had asthma after a jellyfish attack. How did it feel?
DN: I screamed: ‘I’m on fire. I’m on fire!’ The most venomous animal is the tiny Box Jellyfish – the size of a sugar cube. It’s almost invisible, translucent blue. Its tentacles reach just three feet but each tentacle has 200,000 barbs shooting paralytic venom into your central nervous system and bloodstream. Intense pain is followed by paralysis of the heart and lungs.

LPB: What kept you going after that ordeal?
DN: Out of three million Twitter remarks, everyone said: “this is great.” One 59-year-old woman wrote me that the great novel she hoped to write was in her attic. She said: “I’ve watched you and because of what you did, I dragged it out.” That’s what moves me.

LPB: You think the biggest issue for professional women is that they don’t ask for what they want?
DN: Yes. Women are apologetic but for men, it’s a badge of honor. Whenever you are in Lance Armstrong’s presence, he won’t let you leave until he asks you to donate to his cause. He’s raised $400M dollars. Billie Jean King, a friend, never stands on stage and asks.  I can go to a corporation easily and make a pitch for Secret (one of Nyad’s sponsors). But when it comes to wealthy individuals, it’s hard.

LPB: What causes you to continue taking such risks?
DN: I’m a person who is radically individual and irreverent. They told me: ‘A girl can’t be an athlete.’ I have always been defiant. No one is gong to stop me. Everyone told me had I played the game better and been straight instead of gay and more mainstream, I would have gotten much farther ahead. You know what? If that’s what it takes, being someone you’re not, that’s just fine by me.

LPB: What’s your secret to running a successful enterprise?
DN: Surround yourself with inspired, thirsty, intelligent, competent people. I surround myself with the top people in the world. The expense is huge. The boats are chartered. I’ve learned the hard way that this can’t be done unless all conditions are right.

LPB: So, you’re waiting for a big storm and the calm that follows?
DN: Every day is a decision. It’s unnerving. I can’t go out in an easterly wind. When a storm comes through, that weather pattern breaks. After the storm, the waters are absolutely calm. It’s hard to know how much to train. I need to hold the peak every day, as an athlete.

LPB: What is the best advice you ever received?
DN: The head of NAACP’s mom, before she died said: “When you can say you made everyday of your life worthwhile – you will have no regrets at the end.”

LPB: How do you want to be remembered?
DN: It wouldn’t be ‘she’s the greatest swimmer I ever saw.’ It would be if someone etched on my tombstone: ‘The best friend I ever had. If you know Diana Nyad as a friend – you know what a friend is.’