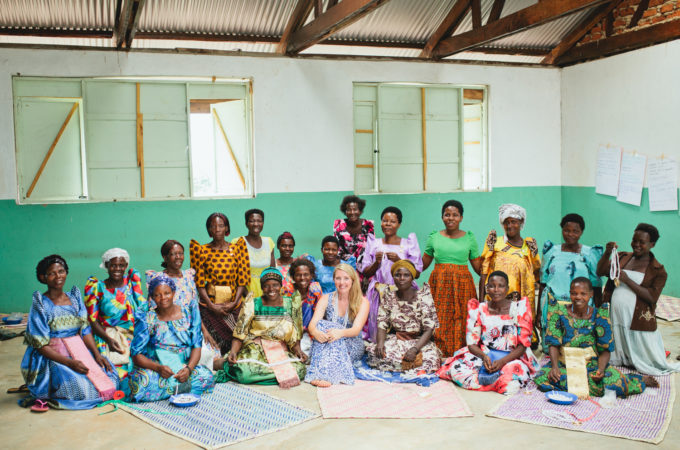 “It’s Not a Handout, It’s a Hand UP.” Akola: Giving Marginalized Women Around the World a Chance June 14, 2018PINK NotesOff

As she stood in the common area of a Ugandan makeshift orphanage, nineteen-year-old Brittany Merrill Underwood began conceptualizing a new way to empower women around the world. The local woman who opened up her home to 24 of her community’s parentless children, Sarah, had no idea that she spurred not only a change of heart, but a change for the women around her and on the other side of the world.

Akola began during founder Underwood’s trip to Uganda during her sophomore year of college, where she and her friends worked in a local boarding school. It was here that she met Sarah and was inspired to help. She returned to school stateside and produced a film to raise funds for a brick and mortar orphanage in Sarah’s village. After reaching this goal and returning to Uganda, she and her team quickly learned there were bigger issues needing to be addressed—a lack of sustainable income opportunity for women and paternalistic cultural values.

“In Ugandan culture, the women of the village are responsible for taking in orphaned children,” says Underwood. “I realized that we were taking this responsibility away from them, so we needed to reconsider our approach. What the women needed most were the funds to care for these children.”

Thus, the Akola project was born. A handmade jewelry collection working through a vertical social market model, Akola assists women who are deemed “unemployable” and marginalized in their communities by offering them work at a living wage. Their mission: Women’s empowerment through economic development.

“It’s a hand up, not a handout. These women are working for themselves and their families,” says Underwood. “When speaking to others in their village, these women can say, ‘My children are in school because I worked.’”

Underwood remains more than active in Akola’s work to create a path to self-sufficiency and independence, taking special care to refer to these hardworking women as “members” instead of “beneficiaries.” In addition to a dependable income, Akola provides vocational training for its members as well education and a path towards holistic healing. Made and manufactured in Uganda, Akola’s model expanded to Underwood’s current residence in Dallas, Texas through an every-store account with Neiman Marcus in 2016. Through this opportunity, women in Dallas are given a second chance to provide a better life for themselves and their families. In Dallas, Akola partners with other local nonprofits to aid formerly incarcerated women, domestic abuse survivors, recovering addicts, and other women in crisis through counseling, job transition programs of their interest, and a low-pressure work opportunity that welcomes and accommodates their children.

PINK had the opportunity to sit down with Underwood to learn more about how Akola helps women design their own stories:

Why was jewelry specifically your choice of trade for Akola?
Jewelry is lightweight and easy to ship and trade. It also allows members to make the jewelry in a low-pressure, communal setting. It really helps the women to bond.

Is this a sustainable practice for women in these areas? In Uganda, for example, are materials for the jewelry indigenous to the country?
The majority of materials used for our jewelry are indigenous to Uganda, and 100 percent of profits go back into resources and outreach for the members. This allows the program to be sustainable.

How long can members participate in the program?
For domestic members, it is a six-month program followed by job transition. Internationally, like in Uganda, it is a little different because sometimes it is the only job available, so the participation period is indefinite. However, our members in Uganda have been able to use their Akola earnings to transition into starting their own businesses.

A lot of the women who appear on your website as members of your Dallas program are black and Hispanic. How is Akola shedding light on racial inequities in the job hunt for women who have been incarcerated, often harshly or outright unfairly?
The Dallas project really shows the city’s socioeconomic inequalities. It’s opened my eyes for sure. We make sure to be receptive and believe these women and their stories. This is not a charity case. We connect these women [the members and the buyers] instead of putting them on display. Often our members speak at our Neiman Marcus events, bringing together women who would probably not even be in the same room otherwise.

In turn, how does Akola encourage marginalized women to pursue sustainable careers following the program?
In Uganda we have the Akola Academy, which trains in current, practical issues [such as women’s health and HIV] and how to combat them. We then train the women to teach one another going forward so that these women are leaders in their own communities. With their Akola earnings women have started businesses within their communities, improving the economy and promoting sustainable business practices for themselves and their villages.

Can we expect expansion to other developing or crisis areas, particularly in Puerto Rico and Flint, Michigan?
We would love to expand and empower more women. It’s all contingent on our retail partnerships and three years of donations, for any new location.

Any possibilities of an Akola project in Atlanta?
Atlanta is my hometown, so it’s definitely on the list. We already have a great partnership with Neiman Marcus at Phipps Plaza, so we are getting closer to making that a reality.

Since its founding in 2006, Akola’s membership has grown to 600 women and raised more than $1.5 million in sales that go back to the women as of 2017. With two freestanding Dallas stores, a partnership with Neiman Marcus and HSN, and new accounts launching in the Fall with JCPenney and Wal-Mart, Akola stands three years away from being an entirely self-sustaining nonprofit.

This is the goal for its members. Today in the Ugandan village where Akola was born, women are sending their children to school, starting businesses, and running for public office. By giving women an opportunity to gain financial independence, Akola does indeed live up to its name–it works. “In the tribe’s dialect, Akola means ‘she works.’ And that means dignity.”