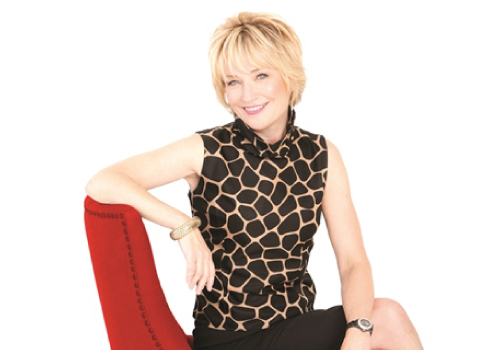 White’s illustrious career began in 1972 when she was crowned one of Glamour’s Top Ten College Women. It was then that the Union College student learned the lesson of a lifetime, and she’s been breaking the rules since.

With few women in leadership positions to emulate, White charted a territory of her own. A young, single woman in New York City, more focused on growing a career than babies, she made her mark pioneering one of the first Carrie Bradshaw-like columns.

“Women weren’t marrying at 22 anymore,” says White, “and they were joining the workforce in large numbers.”

Glamour rarely ran essays, but they loved her personal touch and asked for more pieces about real thoughts.

Since her early days at Glamour, White has become an internationally recognized authority on leadership, success and career – heading up five major magazine brands. She’s also written multiple New York Times bestsellers, including I Shouldn’t Be Telling You This: How to Ask for Money, Snag the Promotion, and Create the Career You Deserve and the Bailey Weggins mystery series (from which If Looks Could Kill was the first reading selected for the Reading with Ripa book club).

Her next novel, a psychological suspense, Eyes on You, is scheduled for release June 2014.

PINK caught up with White to discuss what it was like being on the cover of Glamour, how she became the bossypants of her work/life intersection and what she wants to see more women doing in 2014. Kate White: You were supposed to submit a list of your college activities and write an essay on your goals for the future. I looked through the old August issues for ideas, and it always seemed like cool-looking girls from places like Wellesley were chosen. I figured the only way I’ll stick out is if I write an essay that really grabs their attention. So, I wrote an essay on why I had no goals and worked around to why I do.

LPB: How did that experience change you?

KW: It was probably one of the greatest things in my life. I took a trip to Europe with the other winners. We’re still close; one actually introduced me to my husband. I modeled for a while after being on the cover, and got into the magazine business because of that experience. Having some sort of makeover – I think that can be incredibly invigorating and life-changing. All of us got Glamour makeovers and it really filled me with a lot of confidence.

LPB: What did you do with the cover?

KW: For years I didn’t do anything with it because I thought it was egotistical. Now, it’s framed in a variety of locations! When we moved into a cool, modern building, I needed things in my office that were sort of edgy and modern, so I hung a modeling photo of me on the wall and it was so long ago no one even thought it was me.

The Glamour cover was a confidence builder and there’s a little part of me that thinks eat your hearts out guys who never asked me out in high school.

LPB: What do you think was the single most important thing you did early on in your career?

KW: One of the best things, it wasn’t revolutionary but taught me something, happened when I started at Glamour. Stupidly, I wasn’t confident enough to say I want to be a writer and they placed me as an editorial assistant in the promotional department. So, I started writing little things for the magazine for free. They saw I was enthusiastic and sent me to be a clown in a Ringling Brothers circus to write about it and I ended up getting a job writing short items in the article department.

But, I wanted to do bigger pieces.

I was told I didn’t have enough reporting experience so, without permission, I wrote an essay about being single in New York City. Big chunks of women weren’t marrying at 22 and joining the workforce in large numbers. They rarely ran essays but loved it and asked for more pieces about real thoughts.

I did more than I was told to do, went against the grain and listened to my gut. It was the first instance of me going big.

LPB: Who were your role models?

KW: There weren’t a tremendous number of women with big jobs and families during that time. I didn’t have one really big, clear role model. A number of my bosses who were female didn’t have children. I pulled different aspects from the lives of various women and created my own life that borrowed from them.  You’re never going to be able to hit the mark exactly like someone else, so you have to think about what resonates for you and ask yourself how you can have that in some way for yourself.

I remember the editor at Glamour, who was extremely successful, left every day at 5 p.m. She would get home and have dinner with her family. And, after dinner, they would all sit around as her son did his homework and she and her husband worked.  I thought, that doesn’t sound very fun. I wanted a fun family life.

No extra points from me if you work late instead of going to your kid’s volleyball game.

LPB: What did you do to inject more fun into your family life?

KW: Traveling and doing lots of eco trips. It was only once or twice a year but something to look forward to. We’ve taken trips to Costa Rica, Chile, Ecuador, the Galapagos Islands, the Amazon rainforest, Africa, and Alaska.

Antarctica was the best! One night in Antarctica, my husband and I camped out in the snow together. It was something really fun to do as a couple. We didn’t do trips alone, but one thing we always did was make sure he and I did something that made it a connecting experience for us, too. Sometimes, we would hire a sitter to come to the room and just go out to the bar and have a drink.

LPB: How long have you been married?

KW: Twenty-seven years. I had a starter marriage in my mid-20’s that helped me make a smarter choice in my mid-30’s.

LPB: How old are your children now?

KW: I definitely use some time management strategies. My husband taught me an interesting trick. He never “gets ready” to do something; he just plunges in and sort of just starts. I waste time getting my desk neat and ready.

I was in my late 40’s when I decided I really wanted to write – not career but fiction. I got rid of things on my plate that really didn’t matter and didn’t really work out for a few years. I walked on weekends but didn’t go to the gym.

On Saturdays and Sundays, I started writing for 15 minutes before the kids woke up. When they got older and started sleeping in and I got into a groove, I started writing longer. Eventually, one hour a day per week and two hours on the weekends.

I always knew I would bail [from magazines] at some point; I had to throw something out.

Plus, I didn’t want to be in mag business during its decline.

LPB: What’s your greatest piece of advice to working moms?

KW: You never get it “all.” When you have kids, you make tradeoffs. Kids bring tons of responsibility and you’re going to make tradeoffs in your marriage, too.

You have to make your kids a priority. They need your time – quality time. No extra points from me if you work late instead of going to your kid’s volleyball game.

LPB: Do you make New Year’s Resolutions? If so, what are they?

KW: I don’t make New Year’s resolutions, but I have always made a fun goal list on my birthday. Not necessarily things to do that year but to aim for. When I was in my forties, I put on an old pair of jeans and found one of those notes from years before in a pocket. Two of the items were “Get Contact Lenses” and “Go to Peru” and I was thrilled that I’d managed to do both.

LPB: What do you want to see more women doing professionally in 2014?

KW: Dare to set boundaries. Be the bossypants of your work/life intersection.