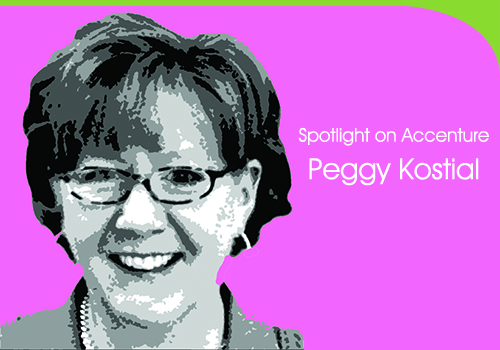 Margaret A. (Peggy) Kostial, a senior managing director with Accenture, has often heard the rumors of women not helping other women. But her experience has been quite the contrary. Getting feedback from a variety of perspectives and opinions has proved to be rewarding for the leader who makes befriending other professional women a priority.

She was previously a managing director, leading Accenture’s North America Energy Practice.  Assuming the role in late 2005, Kostial held this position for seven years. During that time the practice enjoyed a 28 percent compounded annual growth rate – making it one of the largest and most successful industry practices within the firm.

What’s the secret sauce to her success?

“It is extremely important to have a strong professional network – both within your company and externally,” Kostial tells PINK. “It is crucial for a network to be diverse, that is, inclusive of women and men; subordinates, peers and superiors; and multi-national, if the opportunity exists.”

Some of her colleagues have been become dear friends, too.

“I have a group of about six women in Houston who are great friends,” she says. Despite busy schedules, they set aside time for fun together.

“For me, it is energy I want to spend to have people I know and like around me.  It is one and the same as my friendship network – it just happens that I interact professionally with some of the people.”

She credits her positive, go-getter approach to the wisdom of her mother.

This PINK Spotlight is brought to you by Accenture. For more information and career opportunities, please visit  http://careers.accenture.com/us-en/pages/index.aspx.
Share this Article