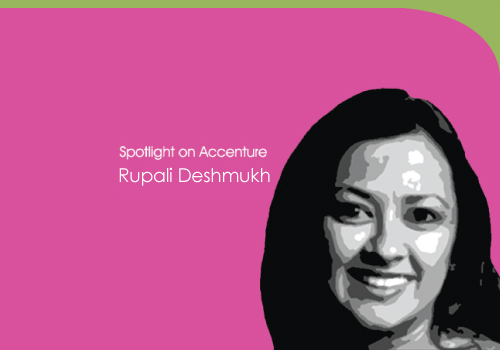 To help extend Accenture’s veteran recruiting efforts, Deshmukh works closely with external partners, including the Wounded Warrior Project and Marine for Life. The champion behind Accenture’s Skills to Succeed global corporate citizenship initiative, which assists veterans with resume writing and interview preparation, her passion for the role comes from the heart.

Born and raised in Meerut City, India, Deshmukh immigrated to the United States in 1999. She joined the United States Army in October 2001, and was deployed to Kuwait as part of Operation Iraqi Freedom in 2005.

Deshmukh attributes the skills learned in the Army to much of her current success at Accenture, but says “there needs to be a better understanding of what military professionals do and how their skills transfer.”

“My first year out was challenging,” she tells PINK, “I was unemployed on and off for a year.”

“It was very hard for me in the beginning to explain to a civilian recruiter what 42Alpha does in the Army, and hiring managers were not sure where I would fit in their organizations.”

Over time and with the help of mentors, she “civilianized” her resume, enrolling in a HR Generalist certificate program at Cornell and taking on contracting jobs to broaden her skills.

The unique qualities she believes veterans bring to the workplace? Perseverance.

“Veterans work well under stress,” says Deshmukh.  Her determination and hard work landed her a job with Accenture and has grown her career since.

“The military emphasis on team work is very strong,” she says, “and most veterans tend to make good leaders because of that.”

This PINK Spotlight is brought to you by Accenture. For more information and career opportunities, please visit  http://careers.accenture.com/us-en/pages/index.aspx.