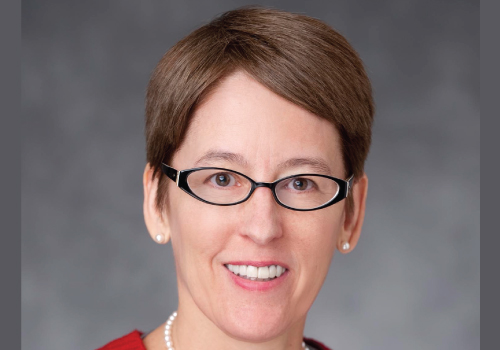 Staying On Her Toes on Wall Street

“When I was around 12 years old, I was the star of the San Diego Civic Ballet Company’s performance of Thumbelina,” says O’Connor.

“I was Thumbelina and completely convinced I was going to be a prima ballerina.”

O’Connor danced from age three to 17.

While she may not be center stage at the New York City Ballet, she is certainly center stage in the financial world.

Years of discipline, commitment and the gumption to take risks helped prepare her for an illustrious career.

Starting with the firm in 1984, she has spent her entire career at Morgan Stanley.

“I proactively made the decision to grow professionally,” says O’ Connor, who runs the new private banking business.

“We need more women in the financial services industry, and I feel like I’ve been given a tremendous opportunity.”

Managing a team of almost 400 private banking product and sales professionals who support Morgan Stanley’s 17,000 financial advisors and their clients, O’Connor holds a top spot at one of the world’s largest companies – boasting $1.8 Trillion in wealth management client assets. Since its inception in 2010, Morgan Stanley’s Private Banking group has focused on building a suite of custom, tailored banking and lending services as part of Morgan Stanley’s comprehensive wealth management offering.

PINK sat down with O’Connor to chat about stepping out of her comfort zone, taking risks and carving time for manicures and family.

Little PINK Book: What’s the biggest career obstacle you’ve faced, and how did you overcome it?
Shelley O’Connor: When Morgan Stanley merged with Dean Witter in 1997, a lot of senior level people came over who I didn’t know. There was a lot of organizational restructuring.

We went from one branch office in California to 25, and I didn’t know any of the Dean Witter managers.

At first, having to do business with so many new people felt overwhelming. Then, I began to see it as an opportunity. I decided I was going to get to know all of the branch managers and senior leadership and figure out how we could partner together.

LPB: What is it about your background that resulted in your choices and success today?
SO: My work ethic comes from my grandfather. He was born in 1896; grew up on a farm and went to the University of Missouri.

Out of a family of nine, he was the only one who kept a job during the Great Depression. He supported the entire family and put two sisters through college.

When I was younger, he would come to California to visit and he would make me watch Wall Street Week with him on Friday nights. He always reinforced the importance of working as hard as you can, not compromising and being accountable for what you do. I reflect on lots of the advice he gave me.

He passed away at 93 years old.

LPB: What’s the biggest risk you’ve taken for your career?
SO: When I started at Morgan Stanley, it was a private company with maybe 4,000 employees. I worked in the San Francisco office before moving to a Los Angeles branch. In 2004, I got a call from the corporate headquarters in New York. They asked me to relocate and become the Chief Operating Officer of the entire branch system.

By then, business had expanded into broad-scale wealth management and my experience was limited to ultra-high net worth clients.

But, I went for it and will never regret it.

I made some mistakes, but it opened the door to many business opportunities. You just step back and learn, and then you push forward.

LPB: What’s best business advice you’ve ever received?
SO: It has been to get out of my comfort zone. When I think about the shifts and paths I’ve taken at the firm – raising my hand, asking for a stretch assignment – it’s those times when you feel a pang in your stomach that you really learn and grow the most.

LPB: What is your biggest weakness as a leader?
SO: Over the years I think I’ve gotten better at this but I’m a bit of a perfectionist. At times, I have a tendency to micromanage.

As a leader, you need to have great people around you. You create a strong team to be able to delegate responsibilities to and then move out of their way.

LPB: What type of legacy do you want to leave?
SO: Family comes first. I’ve always tried to make that front and center my whole life.

I am married with four grown stepchildren and four dogs. I decided a couple years ago that, unless I’m traveling, I’m going to make it home for dinner with my husband. So, I’m out of the office like clockwork and at home by six.

LPB: How do you relax and take “me” time?
SO: My favorite color is red and I relax every Saturday by having my nails done. I know sounds silly, but it’s an hour away from everyone. And, my Blackberry doesn’t get service in that part of town.

I sit down, take a deep breath – it’s great.

LPB: What is your favorite book or one you’re currently reading?
SO: I read all sorts of things, but one book I really loved was The Help.

My husband was a Marine in Vietnam and I’m always interested about how other organizations think about teamwork. Right now I’m reading a book he passed onto me, The Hill Fights by Edward Murphy.

LPB: Do you have a favorite funny, wise or inspirational quote?
SO: Years ago, I attended a big group meeting for Morgan Stanley where they put tiny cards on everyone’s seat. The quote on my card was a quote from Benjamin Franklin that read, “Well done is better than well said.”

I have it up in my office.

LPB: What is one personal goal you haven’t yet achieved?
SO: I am not exercising enough and I have to get back into it. My husband bought a spin bike and moved it upstairs. I asked him if it was a message and he said, “No, you just need to put your Blackberry down.”

I want to make more time for exercise.