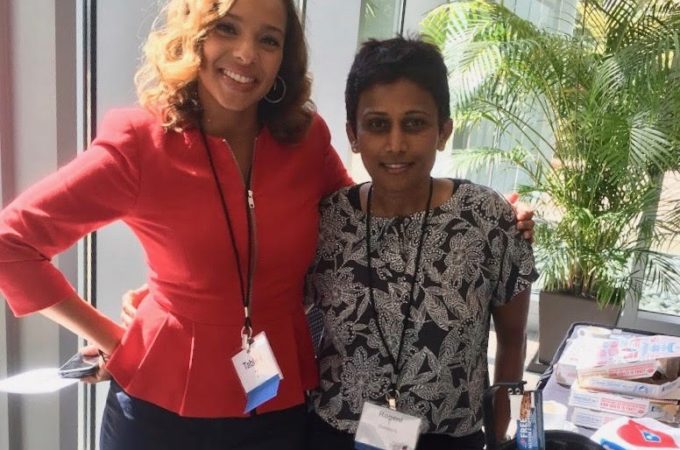 Here’s what you missed…

Nearly 250 women are probably still on a high from PINK’s recent 9th Spring Empowerment Luncheon. For the first time, Cox Enterprises Headquarters opened its doors to PINK’s network of professional women. One of our most candid panels yet, they shared their gems with the crowd:

“I have bad days. I’m late to meetings because my kid missed the bus and can’t find a shoe,” said Kate Jaspon, CFO, Dunkin’ Brands.

The panel discussed authenticity at work and what it means to be authentic and professional at the same time. Most panelists concurred with being mostly the same at work and at home. Teri McClure, UPS CHRO and SVP of Labor, disagreed however, and her response exuded authenticity: “I don’t bring my whole self to work. I have one image there and another with my husband and kids. And, I’m okay with that.”

Panelists differed from one another, as they told the audience how they can align with this year’s theme–Spring Into Action! Your Highest Performance: Mind, Body and Spirit.

Presenting sponsor BMW greeted PINK’s ambitious women and several evolved men with four of their luxurious vehicles, poised under the sun just outside the venue. Guests networked and shopped prior to the program in the PINK Bazaar; a forum historically known for building relationships and closing multi-million dollar deals over the last 14 years. Sponsor Domino’s remained a yummy point of attraction with their “Pizza of Fortune” wheel that could be spun for prizes and a smorgasbord of samples from pizza to garlic knots. Seeing women in blazers, letting their hair down and eating a slice of pizza was definitely a highlight of the afternoon. Other vendors included sponsor Canyon Ranch, Socks N Socks, Jewels for a Purpose and India Hicks.

Cox Enterprises Executive Vice President and top woman at the company Jill Campbell welcomed everyone with opening remarks and introduced PINK founder and CEO Cynthia Good, who had some hard truths to share with the audience:

Women only hold 21 percent of board seats.

Only 11 percent of top earners are women.

The program featured these stats under “Fun Femme Facts,” with the word “Fun” crossed out. Good also noted that it was National Renewal Day, a day to re-charge and set new goals so women can actively advance their careers and their lives. “It is a reminder,” said Good, “to all of us to spring into action, and to change those statistics.” The panel agreed.

Moderated by WSB-TV Anchor Jovita Moore, CFO of Dunkin’ Brands Kate Jaspon; UPS’ CHRO and SVP of Labor Relations Teri Plummer-McClure; Aaron’s, Inc. CIO John Trainor and Cox Media Group EVP Jane Williams sounded off without hesitation on how women can take action in their careers and perform at their highest level. McClure advised attendees to embrace the now in their careers, even if you are not where you want to be:

“You’re not always in the job you want or doing what you enjoy,” said McClure. “During those times, I think about my plan for success and how this moment fits with my overall plan.”

Trainor reminded the women in the audience to push themselves to the other side of fear. “Always default to ‘go,’” he said, encouraging women to remain an active agent in their organizations.

Personal agency appeared to be a common thread among the panelists. Williams encouraged women to fight for their seat at the table. “I grew up with three brothers, no sisters. I’m used to fighting for the last chicken wing on the table. I spring into action everyday.”

Jaspon, on the other hand, embraces the slow and steady. “I work in finance,” she quipped. “I don’t spring into anything.”

This notion continued when discussing authenticity and the #MeToo movement. McClure, who often counsels corporations on this topic, considers the movement an opportunity to reinforce the responsibility of corporations and leaders to ensure a no-tolerance and no-retaliation policy as courageous companies and women continue to lift the veil on sexual harassment and assault. Trainor drew laughs when he shared his personal “no hugging” rule in the office, but he remained serious about how men have to take action in the movement, too, as allies for women at work. “It is a huge responsibility for men to understand the power of respect and the critical nature of it,” he said.

On authenticity, Jaspon admitted to feeling like she had to compensate for being a young leader surrounded often by doubters or older peers. When she gave birth to premature twins, she found herself pretending she could handle all of her new responsibilities easily and everything was fine in the office. “In hindsight, I see I did myself and my employees a disservice,” she said, “I had to stop allowing myself to be insecure.”

Onto other matters… PINK raised $2,560 for Girl Talk, the nonprofit selected for the spring event. Over the years PINK has raised over $100,000 in support of nonprofit organizations for women and girls. Girl Talk is an Atlanta organization training girls to be leaders in their fields, building confidence and business literacy. “My absolute favorite part of the day was watching the reaction of the woman that won the excursion to Canyon Ranch. That’s the reaction you want–she couldn’t hide her excitement,” said Executive Director Megan L. Rock after hearing screams of joy from the winner of the four-day stay at the exclusive spa. Guests also had the opportunity to win luxury jewelry, a 3-liter bottle of The Palm Rosé, a lingerie party at Rigby&Peller, a year’s worth of Domino’s pizza, a weekend test drive in a gorgeous brand new BMW convertible, and more by supporting Girl Talk. Guests departed with fully loaded swag bags, courtesy of Rigby&Peller and other partners. But, best of all, they left with a  plethora of invaluable wisdom from top business leaders.

It is always a treat to share a room with such powerful and honest women and men. There is more to come, and more women to empower!

“[W]e all have lived, too many years in a culture broken by brutally powerful men. For too long, women have not been heard or believed if they dared to speak their truth to the power of those men. But their time is up.”
–Oprah Winfrey