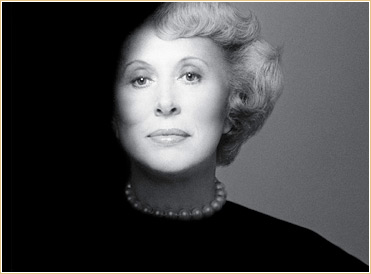 The legacy lives on for one of the world’s most successful businesswomen, Estée Lauder.

A pioneer in cosmetics, Estée Lauder was born “Josephine Esther Mentzer” on July 1, 1908 in Queens, New York. Her parents, immigrants from Eastern Europe, were hardworking owners of a hardware store, above which the family lived. Shortly after World War I broke out, Lauder’s uncle, a chemist who created skin care products, came to live with the family. Inspired by his work, Lauder decided she wanted to be a chemist. She watched in fascination as her uncle created skin creams and soon learned how to produce and sell his products. This experience helped her to develop skills in merchandising and marketing at an early age. According to one of Lauder’s famous sayings, “To sell a cream, you sold a dream in the early days.”

In her early twenties, Josephine Esther Mentzer met and married textile salesman Joseph Lauder, and together they had two sons, Leonard and Ronald. A dedicated businesswoman, Lauder continued to revise and enhance her uncle’s beauty creams, which she called “jars of hope”. Lauder was so passionate and committed to her products that she would create her own opportunities to market them. She gave free demonstrations and makeovers anywhere she could, including hotels, salons, the subway, and even the street. She also personally visited her clients’ homes to perform makeovers and sell creams to their friends. With the teamwork of her husband Joseph, Lauder opened her first store in New York City in 1944. She sold her beauty products during the day and cooked them during the night on the stoves of an old restaurant she and Joseph had converted into a factory.

After years of hard work and persuasion, Lauder’s products took off in upscale retail establishments, such as Saks Fifth Avenue. In the early 50’s, her products became recognized in many more prestigious stores, and Lauder achieved notoriety for her creative promotion strategy of free samples. Her free gift with purchase practice eventually became standard in the industry.

In the decades to come, Estée Lauder’s product line expanded, and her tiny company transformed into a multi-million dollar business. In 1970, 575 businesses and financial editors named Lauder as one of Ten Outstanding Women in Business.  By 1999, over fifty percent of beauty aids sold in America were Estée Lauder.

Later in her life, Estée Lauder was quite philanthropic and established the Joseph H. Lauder Institute of Management and International Studies at the University of Pennsylvania to honor her husband after his passing. She also contributed to National Cancer Care and the Manhattan League. In addition to many awards in the cosmetic and fashion worlds, Lauder received the Presidential Medal of Freedom, the highest civilian award of the United States. In April 2004, Estée Lauder passed away, although her company still remains in the possession of her sons. Estée Lauder will always be remembered as she once described herself:

“I was a woman with a mission and single-minded in the pursuit of my dream.”

Estée Lauder became known for “Lauderisms,” her tips and pieces of wisdom from her own life experiences. Below are her 15 rules of advice to aspiring entrepreneurs from her 1985 autobiography, Estée: A Success Story.

Ariana Feiner is the author and creator of It’s a Jolly Holiday with Ariana: Celebrating Global and Lesser-Known Holidays.