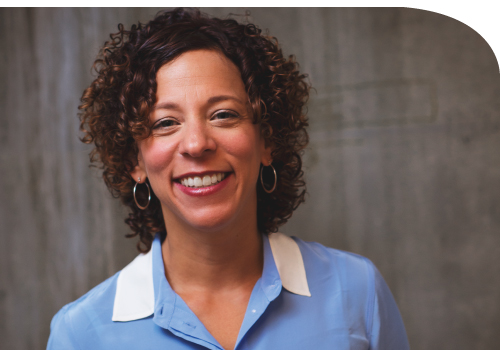 “Because I’m awesome.” Those were the first words Brooks Running global director of brand marketing, Heather Snavely, said when asked why she’s enjoyed such a successful career.

An unusual response when considering the internal barriers facing women.

According to a recent survey of 2,000 British women by Head & Shoulders, 48 percent said they believed they would be further along in their careers given more confidence. And, 92 percent said they felt their lack of self-assurance was holding them back in some aspect of their lives.

Snavely says it’s her strong confidence that has enabled her to build a successful career, which includes launching Kinect for Xbox 360 and working alongside Hilary Clinton. “I’ve been fortunate to have a very rich career,” she tells PINK. “I have been in places where I was able to take risks.”

That confidence gave her the ability to step outside her comfort zone, to stand out from others.

The wife and mother of two, a 12 year-old daughter and 10 year-old son, is at ease in her own skin; aware of her talents and accomplishments, unthreatened by the potential of others.

“I have been able to work with people who are smarter than me,” says Snavely, “To do the job I have and be a good wife, mom and friend, that’s really important.”

She strives to give young women the same opportunities her mentors gave her to build confidence-driven careers.

“It’s important to give back,” Snavely says. “I always had great women mentors, like (former Edelman US CEO) Pam Talbot. And, they’ve been instrumental to my success.”

Snavely isn’t afraid to say she’s successful or share her accomplishments. And, you don’t have to play coy, either.

The next time someone asks why you think you deserve something, tell them: Because I’m awesome.

BONUS PINK Link: When it comes to leadership ability, how important is gender? Read why Molly Maid president, Meg Roberts, says it isn’t.

“Courage is like a muscle. We strengthen it by use.” Ruth Gordon