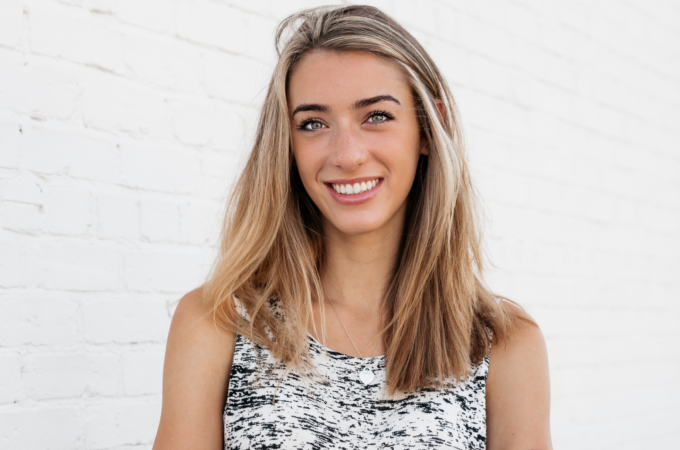 How to Kick Ath at Work March 20, 2019Featured, My Business, My Career, My Fashion, My Life, SpotlightOff

Life for working women moves at a speed just under the speed of light. Whether you’re a working mom, a senior executive, or just starting your career, you’re probably squeezing out every bit of sunlight the day gives and borrowing a few minutes from the night. With all the stress, rising obesity rates, and an interest in staying fit and healthy, working women do their best to stay active. What if you could cut hours of time by altering the same outfit for work and working out? Sarah Hamer came up with a way to do just that.

After finding herself in this very predicament, Hamer says, “I started DASDUO when I found a problem with women’s workwear and decided to solve it. I was co-oping (which is essentially a long term engineering internship) and hated changing after work/was uncomfortable walking my dogs during my lunch break. After being unable to find business casual athleisure online, I decided to make my own line. The business part came after I realized I was passionate about the work to workout apparel concept.” There are plenty of clothing lines that specialize in athletic wear, but Hamer says she didn’t always have the time to change for a quick work out between meetings. She says, “in the extra busy life of women

DASDUO eliminates one more thing on the list: Changing clothes.” Hamer chose DASDUO as the name because, “DAS means ‘The’ in German, so it is essentially ‘The Duo’. My elementary school taught German, and I liked how gender-neutral DAS sounded.”

Her debut line includes skirts, pants and tops, ready for both the gym and the office. Her personal favorite is the Ponce Pencil Skirt with its detachable wrap skirt over jogging shorts. She says, “it’s great for going from meeting to lunch.” Her company is an Atlanta start-up featuring products named after familiar areas in the city like the Piedmont Pants and the Peachtree Top. Hamer says she chose these particular items to feature on her launch line after, “I spent months designing, testing, and repeating to create five perfect pieces. I wanted three bottoms that women already wore to work every day, and then I incorporated an element into all of them that made them perfect for working out. The two tops go perfectly with the bottom to create the essential work to workout outfit.”

She says she designed all the pieces herself, but she had a little help from her friend in designing the Piedmont Pant. Hamer recently launched DASDUO with support from her friends and family. She says, “It is me and 3 of my friends that help with website, marketing, and finance. Those models are actually my friends who either graduated or still go to Georgia Tech. Two of them are also on the DASDUO team!” Hamer says the most exciting part of this new venture has been, “meeting people and attending conventions I would not normally go to. For example, I went to the NYC Fabric Convention to source fabric and it was a great experience.” Hamer is hopeful about her company and looks to make it her full-time job by the time she graduates. She says, “I plan on constantly innovating new styles and designs to get women from work to workout without changing.” With her help women can continue to kick ath at work. Now, we won’t even have to change to do it.

“No one knows… underneath these clothes… I can fly.” -Alicia Keys