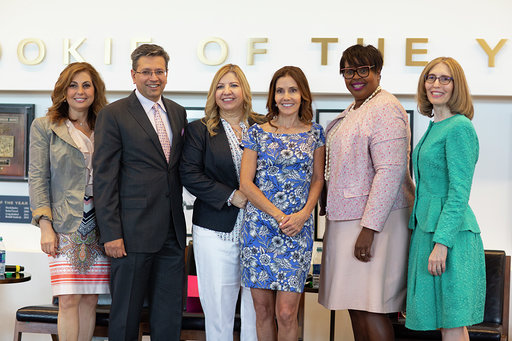 Playbook for Success – the Highlights! May 15, 2019Events, FeaturedOff

Toot your own horn… do it with humility.

This was the favorite takeaway from the Spring’s PINK Empowerment Event at SunTrust Park. Wise and generous business leaders shared their hard-won strategies for success in the workplace. It’s all about, “Grit and focus. Desire to get it done,” said Baker Donelson’s Senior Managing Shareholder, Linda Klein. She and Cox Enterprises’ General Counsel, Juliette Pryor; The Home Depot’s Chief Diversity Officer, Beatriz Rodriguez; Crawford & Company Global Chief Operating Officer, Rohit Verma; and our moderator, CNN Editorial Producer, Nadia Bilchik talked about their personal experience and overcoming obstacles as hundreds of passionate and ambitious women listened in. “The way you respond in the moment, matters,” said Juliette.

Twenty women from Southern Company took what they learned on Friday to the next level as we explored top takeaways from the panel conversation and looked at how each woman could implement some of the wisdom in her own career; with input from consultant and former Deloitte Partner, Annette Tirabasso and Turknett Leadership Group Founder and Chairman, Lyn Turknett.

After Rohit stated, “Look for someone to be your advocate,” we talked about how to actually find an advocate. (Takeaway: Don’t say: Will you be my advocate? Do: Ask for advice and guidance.) The women attending the debrief realized they already have advocates since they were selected to participate as part of PINK’s Annual Corporate Partnership consulting program for Southern Company.

Women in many industries still experience a workplace culture that alienates women and minorities. “There is a problem in the workplace. And we’ve got to fix it,” said Linda. “The workplace has to change,” added Juliette. “People of color are not making it to the C-Suite. It’s a true challenge.” In some industries, “It’s worse than it was 15 years ago.” But until that happens, we have to work with what we have suggested Juliette, who taught herself how to adapt. “I’m left handed. I’ve learned how to work in a right-handed world.”

The speakers agreed that those in the workplace are not the problem, “Rather than change the people – change the environment,” said Beatriz. Until real change occurs, the speakers emphasized the importance of perspective and staying positive. “Believe you can achieve whatever you want,” said Beatriz. “It’s not about barriers. It’s about how to overcome them. Never be a victim of your environment.”

Other takeaways included: Get feedback. We realize this is easier said than done. Beatriz chided us, “we might be right — because we’re always right!” In our post event debrief we bounced the feedback idea around a lot and finally agreed with the panelists who said that feedback is a gift and the person giving it doesn’t “need your excuses,” as Beatriz said. “Say ‘thank you. I’ll do better next time.’” And rather than asking the general, “How’d I do?” ask for specifics such as, “What would you have me do in order to be better?” suggested Beatriz.

In our recap, the women agreed that feedback is devalued when we are defensive. Even if you don’t agree with it, Lyn Turknett discouraged being argumentative and suggested avoiding words like “but.” The word “and” may be a more effective alternative. Most debrief attendees liked the idea of listening to feedback and demonstrating they heard and understood it; then following up by asking the boss if they hit the mark.

Ask for what you want, said Rohit. “If you don’t ask, you don’t get. Make sure the right people know when you’ve done great work.” How to do that? Beatriz suggested writing down what you want to say, “Get facts. Do your homework. Don’t ramble to fill space.”

Pretty much everyone agreed it is often difficult, and well, awkward to ask for a raise or promotion or specific opportunity. “Be comfortable being uncomfortable,” said Juliette.

Women are encouraged to toot their own horn. But this can appear self-serving and counterproductive. Do it with humility, the post event group agreed.

With all the workplace obstacles and responsibilities, and a heavy load for women at home, especially for caretakers — we put a lot of pressure on ourselves. Beatriz shared, “I still feel that I’m not good enough.” This also led to a key takeaway for women in the Southern Company group. They acknowledged the importance of introspection and not putting so much pressure on ourselves.

Be vulnerable. We talked about how people see us succeed, but not where we messed up, said one young woman. “Admit where you struggled.” We are all a combination of strengths and struggles, and acknowledging it can put both parties at ease.

Ironically, in our interview prior to the PINK Event, Nadia asked what I thought was the biggest success secret. I said it was that — “vulnerability.” Vulnerability allows us to share the good things we do and our capabilities in a way that demonstrates our humanness and gives us a chance to connect with each other on a personal level.

We can’t wait to hear and see what happens when we talk about FEAR at the PINK event this Halloween at the Crowne Plaza Ravinia in Atlanta with another world-class panel:

We couldn’t have these events and conversations without support from our generous sponsors. Special thanks to Your Atlanta Area BMW Centers, Southern Company, SunTrust and Cox Enterprises. Thanks to our Bronze Sponsors: Back to You, UPS, The Home Depot as well as Coca-Cola, Southwest Airlines and Atlanta Homes & Lifestyles.

“Do your best, one shot at a time – and then move on.”
Nancy Lopez, Golfer 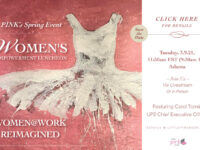