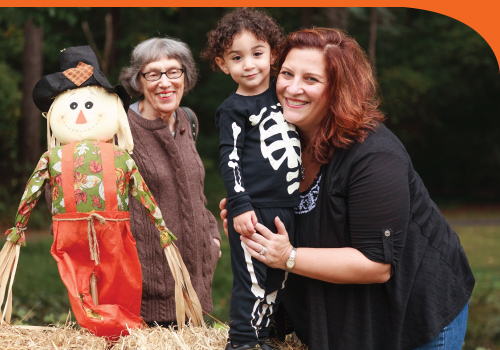 Can you imagine scooping your one year old into the car to drive several hours to care for your sick mother, all while managing a practice at a U.S. News & World Report ranked “Law Firm of the Year?” Welcome to Emily Borna’s life.

For the last two years, the Jackson Lewis law firm shareholder and married Atlanta mom of now three year old, Bennie Borna, has wrestled with the unavoidable life-alterations required of someone with a high-powered career, who must also care for a young child and elder parent unable to care for themselves.

Borna has made the necessary changes to continue being the best daughter, mother, and lawyer she possibly can. How does she manage? “With a lot of balls in the air and a sense of humor when I can muster it,” says Borna.

She has re-framed her life in an effort to accommodate her 85 year old mother’s worsening symptoms while meeting the needs of her young son.

While she may often feel alone in this difficult struggle, she actually has plenty of company. Two and a half times more women than men provide 24 hour a day “on-duty” care for someone with Alzheimer’s; a statistic that does not even account for women like Borna who are unable to care for a loved one in need around the clock. “I can’t be there every day; I can’t be living with her,” says Emily, who calls the experience “a balancing act,” and advises “you have to live in the moment  and just try to prioritize—it can be overwhelming and exhausting, too.”

Alzheimer’s impacts women the most. Not only are most caregivers women, most of those who battle the disease are women, too. In fact nearly twice as many women will get Alzheimer’s as breast cancer. Overall, two thirds of Americans diagnosed with Alzheimer’s are women. We have a one in six chance of getting the disease after age 60, compared to one out of 11 for men.

Nonetheless, there are ways we can try to combat the illness.

Little PINK Book’s CEO, Cynthia Good, has found  a creative approach to raising awareness and funding as one of Atlanta’s Dancing Stars to End Alzheimer’s. She appears live on May 3rd. To help, CLICK HERE TO VOTE for Cynthia with your donation. Check out the video too: http://vimeo.com/90696404.

While her mom’s diagnosis hit Borna hard, there was a clear upside. “It was really emotional initially, [but] it reaffirmed what was going on.” On a practical level she is more understanding when her mother asks the same questions over and over again and patient. In the instance when her mother’s phone got turned off, Borna realized the bills were’t being paid and added this new responsibility as something else she needed to manage. The formal diagnosis of Alzheimers also “gave us a basis to try new medication to try to slow down the progression,” she adds.

Still, with every solution there has been a setback. “I moved my mother from Athens, Georgia to a location seven miles from my home,” says Borna, describing her mother’s move after a stroke as “incredibly draining.” Borna adds that the adjustment has been very challenging for her and her mother, who had always lived on her own. Along with the struggle to find a group home was the extra task of finding a home where her mother could take her favorite fur child—her pet labradoodle name Georgia.  Borna recounts that her mother “had her dog living in her new assisted dwelling for a year and a half but at a certain point it just got to be too much for her.” Now, Borna has taken Georgia into her own household, along with another rescue dog, cat, and several goldfish.

Borna’s expertise as an attorney helps her plan ahead. “I very quickly put financial power of attorney and healthcare power of attorney forms in place.” But it is time-consuming managing her mother’s affairs.  Sadly and very common, her mom “is in denial about her diagnosis and is resistant to taking medication. She is a little more hostile and impatient than she used to be, and upset, particularly during evening hours.” Borna notes, “I learned not to plan anything with my mother in the evening because she’s simply not going to be receptive to it.”

Some rewards have come from the experience, though. Borna finds herself “working on compassion and patience and acceptance and making peace with those things she cannot change,” as well as honing her problem-solving skills. “I can relate with my personal experience to questions I get from employers for advice and counsel on how to deal with caregiving situations in the workplace.”

Always on the fast track in her career, now she’s learning the power of intense patience, forgiveness, kindness, and love she exercises daily.

She’s also learned to lean on outside support.

She’s the kind of hard-working, efficient, self-starting leader who is used to taking responsibility head on, so it’s especially touching and humbling to see the intelligent trailblazer acknowledge the importance of an external hand. “You do what you can to make the situation easier, and do what you can to realize you’re gonna need some help and support and seek out those resources,” she smiles.

Borna looked to resources like the Alzheimer’s Association, Atlanta Jewish Family and Career Services, and Emory Hospital where she found aid in the form of education, long-term planning tools, support groups, and medical care. “I was impressed with the way  our provider at Emory handled the situation by including my mother in each step of the discussion,” she says.

Today, 5.4 million Americans live with Alzheimer’s, and a new person is diagnosed every 68 seconds. It’s the only cause of death in the United States that cannot be prevented.

“It’s a little scary, too,” mentions Borna, “because it’s hereditary; it makes me think of what lies ahead in my future, and that of my son.” Nonetheless, what she cannot control she has gained the ability to cope with.

In spite of confronting an endless chain of challenges, Borna is awake to the never deteriorating love she has for her family.  She says Bennie “cannot appreciate what is going on, but it makes my heart full every time I see him and my Mom together.” She makes as many plans involving the two of them as possible. “There are still a lot of things that my mom can do with him, though she is not really helping with his caretaking. It is heartwarming to see them together and it’s joy for both of them.”