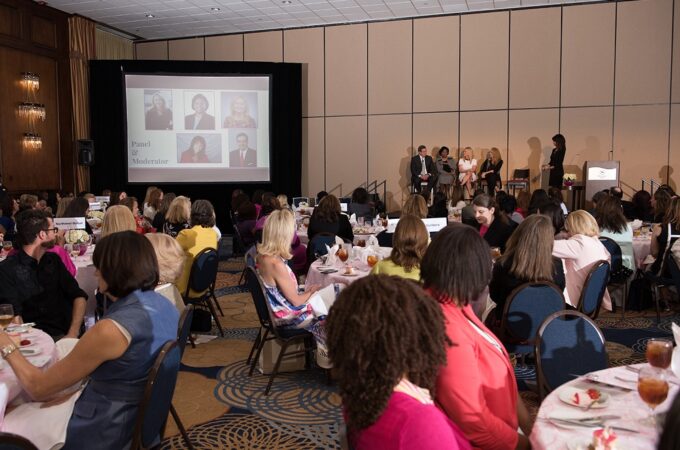 Since its inception, PINK has stood for the acknowledgment and advancement of women, and women of color in particular.

But we—meaning myself and PINK—haven’t done enough. Although we have examined the forces that keep black women from excelling in business, there is more to say. We need to include more black women on our panels and place greater focus on the impact race has on women’s advancement.

Here’s the truth: All women struggle in the workplace due to entrenched sexism, but black women encounter additional forms of discrimination, which more severely impede their ability to climb the corporate ladder. This discrimination is the result of a culture of white supremacy that influences every element of society.

To not speak up—and to not stand up—is to be complicit. It is necessary to take bold action and make our position clear. PINK unequivocally denounces all forms of racism, and white supremacy defined as: The state or condition of being superior to all others in authority, power, or status.

To view the civil unrest of recent weeks as a “flash in the pan” or as “just a bunch of crazy looters” is to fail to consider the deeper, pervasive and systemic injustices that brought us to this point.

Women of color experience both racialized and sexualized harassment and discrimination— at a higher rate than white women. For years it was a struggle to find any women in leadership roles to feature in our articles and on event panels since there were so few. CEOs would tell me, “We don’t have senior level women executives because we can’t find any.” Not only is this excuse unacceptable, this is precisely the reason to look further and work harder. We know that white women alone cannot be the face of diversity.

The racial inequities in business are undeniable.

PINK was created 16 years ago to address numbers like these, and to showcase and advocate on behalf of women at a time when no other national magazine featured working women. When we launched PINK magazine, the CEO of Forbes magazine told us it didn’t matter that their magazine didn’t feature businesswomen saying, “If it’s a good stock price, that’s all that matters.” Well, featuring and sharing the stories of women does matter. There has been progress since that conversation occurred, but we haven’t gone far enough to embrace diversity and walk the walk. This letter is a small step in that direction and we will need to step up our efforts in an ongoing capacity resulting in more black women leaders being featured and supported, and more conversations about race going forward.

Having witnessed the slow progression of the women’s movement in recent decades, I’ve seen firsthand that organic change isn’t enough. It’s just too easy to uphold the status quo. This is at the core of the consulting work PINK does with companies that are finally ready and willing to shift and actively move more minority women into key roles. It’s up to each of us to speak up and step up in order to bring about change. What can you do? Do you have the courage to speak up when you see an injustice? Do you have the courage and the willingness to make the extra effort to defend and promote our black brothers and sisters? At PINK, we believe we have a human obligation to do so—and that it is an honor to work toward giving all women the opportunities they deserve.

Here are a few ways to stand with black Americans to demonstrate support:

Thank you for all that you do!