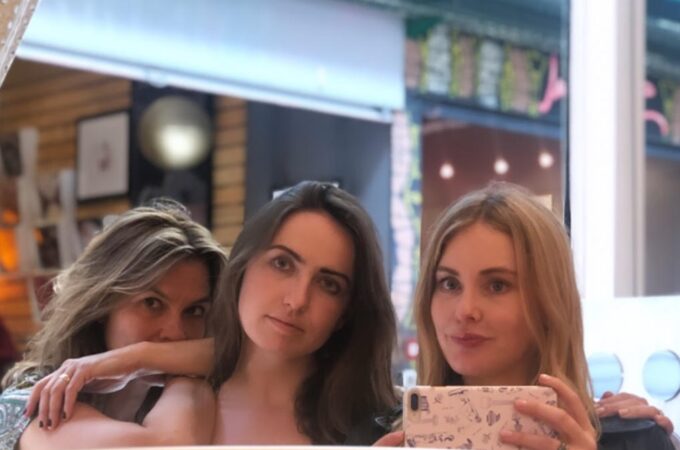 The Three In The City November 13, 2019Featured, PINK Community, SpotlightOff

Three women in their 20s, 30s, and 50s in New York City have banded together to motivate and inspire each other, and their story just might leave you inspired too. Although Alison Chace, Kate Robards, and Lucie Fleming hail from different decades, they’ve built a relationship based on a committed desire to see each other succeed.

In today’s culture, dominated by generational squads, these three women comprise an unlikely trio. Chace, in her 50s, is a mom, actress, producer, and online entrepreneur. Robards, in her 30s, is a writer and comedian. Fleming, in her 20’s, is a singer and actress. On paper, it’s easy to see all three women are performers. But they share something in common beyond the storytelling itch: a willingness to go deeper, no matter a person’s age.

“I think age prevents us from connecting to people because we just assume that older or younger people can’t relate to what we are living through every day,” says Fleming. “I have found that this is not the case at all, and that there is immense value in having friends of all ages. I think it is important that instead of falling into conversation habits like, ‘I’m already this age and this hasn’t happened,’ or ‘I wish I had done that ten years ago,’ we have to celebrate exactly where we are at and realize every chapter of life is important and special. That’s something Alison said in an interview once and it has always stuck with me.”

They met in a one-year theater conservatory program with The Barrow Group, run by founder, actress, and director Lee Brock who Chace says “absolutely set the tone for light, love, and positivity.” Initially impressed by each other’s talent as they met three times a week for a year, they realized the other two also brought emotional wisdom. Their chance meeting evolved into a friendship with space for these women to grow through the ups and downs of their careers and love lives with insight from three distinct decades.

One insight they all share? It’s okay to brag. Bragging typically gets a bad rap among women, but Regena Thomashauer, author and sisterhood architect you may know as Mama Gena, advanced the idea of brazenly bragging. Her idea is that women, steeped in mutual victimization, rarely share the good in their lives for fear of making other women feel somehow lesser. But she says that habit breeds negativity, which suppresses us instead of empowering us to live up to our potential. Instead, she invites women to consider there’s enough goodness to go around, and we can bolster others by sharing wins and brilliance.

Our three multi-Thgenerational leading ladies lived out this wisdom by fostering a bond founded on positivity rather than negativity. As Chace puts it, “When you stand in your own radiance, you allow another woman to stand in hers.” Robards echoes the idea: “It’s okay to be your most beautiful, powerful self because it allows others to stand in their truth.”

They connect daily via technology: through group chats, Instagram chats, goofy memes, or FaceTime pump up sessions. They email each other audition opportunities or networking events or inspiring poetry. In person, they attend plays, concerts, creative workshops, or moon ceremonies, and show up for each other’s gigs. “We are constantly consuming, sharing, and championing each other’s work,” says Robards.

“It’s just a general understanding that the purpose of our relationship is to completely trust we have each other’s back,” says Chace.

Chace is no stranger to cultivating female empowerment. She’s hosted intimate salons catered to celebrating women, and extends her reach to a wider community through her online platform Pink Wisdom, which functions as a digital support network, drawing together nearly 60 female experts to dish out their secrets to building powerful careers and affirmative romantic relationships.

“The more I give, the more I get,” says Chace. “Helping others helps me.”

Robards has drawn on her experiences living around the world to write plays she also performs. She’s performed at the Apollo Theater in front of a crowd of 1,600, and has written jokes for Kathy Griffin, Busy Philipps, and Stacey Abrams. She holds a Master of Fine Arts in writing, and has raised thousands of dollars through benefit performances, supporting nonprofit theater and shelters for women and children. Her stated goals are lofty — write a bestselling book, perform a six-week off-Broadway solo show, have a Netflix comedy special, and land a five-season TV show based on the Netflix special — but in the company of inspiring women, she feels confident to aim high.

“The women in my circle believe in dreaming big and going for it,” says Robards. “With their support and belief I know anything is possible.”

Fleming — a Stanford University graduate, singer, writer, and voiceover actor — moved to New York City to chase down her dream of working as a theater and film actress. In fact, she took a cab from John F. Kennedy International Airport straight to The Barrow Group, so Chace and Robards were two of the first people she met in her new city. They’ve helped her hunt down new opportunities; Robards recently recommended her for a web series, and Chace introduced her to her commercial agents and voiceover casting directors.

“I think of Kate and Alison as both my business partners and my best friends — we work really hard and have a lot of fun together,” Fleming says.

The positivity they’ve absorbed from each other inspires them to be better versions of themselves. “From Alison I’ve learned that it’s okay to ask questions. It’s okay to be direct,” says Robards. “With Lucie I’ve learned to wear your heart on your sleeve; to tell your friends every day that you love them.”

“I’ve never seen a woman with more ambition than Kate. She has taught me to be relentless in my pursuit of what I want out of my career and out of my life,” says Fleming. “Alison is the best listener I’ve ever met, and there is no one more engaged with the successes of their peers and colleagues. She is pretty much everything I hope to be in 25 years. She knows what she can bring to the table and yet she is always, always willing to learn and grow.”

“My biggest takeaway is how important it is to surround yourself with positive people who lift you up and who get [the acting] industry,” says Chace. “Having a support network is crucial to hurtling into your dreams.”

Through uplifting each other, all three women are thriving. They are continually working; Fleming recently starred in the forthcoming Sofia Coppola film On the Rocks, starring Rashida Jones and Bill Murray, and Chace guest starred on HBO’s hit show Succession. If there’s ever a lull, they make it happen for themselves and create their own work. They don’t question if they’ll make it but instead boldly ask, “Why not me?”

In a competitive job market where 100 people might stretch out the door in line for one role, these three share the philosophy that women can be smart, sexy, tough, and vulnerable all in one breath. They free each other from the terror of perfection. They live each day with the mantra, “Be proud. Stay strong. Be healthy. Be sexy.” They hope women will be inspired by their story, and live in the knowledge that if they can build positive, powerful sisterhood, you can too.