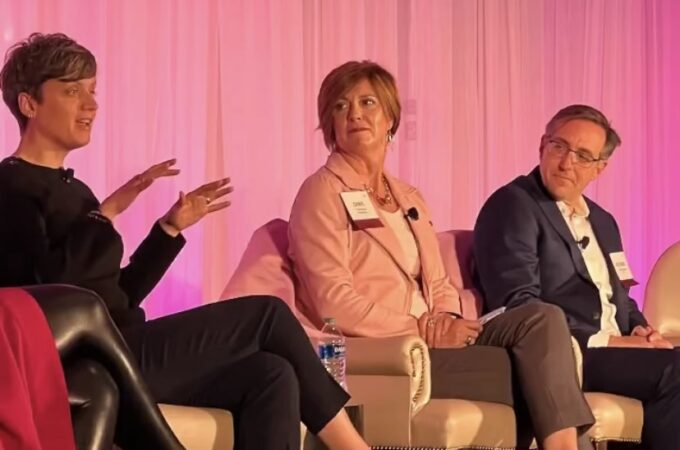 Modern day superheroes walked on stage in pink capes at PINK’s recent 18th Annual Fall Women’s Empowerment Event at the Intercontinental Buckhead Atlanta. Even the lone male leader among them donned the cape, and for him, a pink eye mask as well. “It was Halloween, and they were good sports,” said PINK CEO Cynthia Good whose company has held these empowerment events, featuring C-Suite women leaders of Fortune 500 companies, (and a few brave men) consistently for nearly two decades.

“Events like this normalize women in leadership roles. We’re operating in a system that wasn’t built for us,” said Brandi Thomas, Group VP, Chief Audit Exec and Chief DE&I Officer, General Electric and one of the speakers on the distinguished panel.

Good asked the leaders to genuinely share their own experience navigating their careers, delivering success secrets and hands-on tools to benefit the 470 who signed up to attend in person or watch the livestream.

Julienne Smith, Chief Development Officer, IHG Hotels & Resorts, recalled wanting a particular job for which, initially she wasn’t even considered. “The hiring manager said, ‘I didn’t think you’d be interested because you just had your second baby.’ I [told him], ‘My husband is a stay-at-home dad and we’ve lived in seven cities so I’m sorry you weren’t paying attention, and yes I’m very interested.” She stepped up, had the conversation and got the job.

Cynthia kicked off the event sharing troubling statistics demonstrating the profound discrepancy between men and women in top jobs. “This should bother you,” she said. One in four C-suite leaders is a woman, one in 20 is a woman of color. And one out of every three Black women leaders says she has been “denied or passed over” for opportunities because of “personal characteristics including race and gender” according to recent Women in the Workplace Report 2022 from LeanIn and McKinsey & Company.

Fox 5 Atlanta, WAGA-TV evening anchor Courtney Bryant, moderated the panel and asked the leaders to share who they consider a superhero.

Julia Houston, Chief Strategy & Marketing Officer, Equifax said “I have to admit when you asked about being a superhero, my initial reaction was, I am definitely not a superhero. Then I thought that goes against what we’re doing here, which is to celebrate that we’re all superheroes. Every single person in this room has an equally great story to tell.”

Brandi said, “Any character from Black Panther because representation matters. We need as many voices of different lived experiences in the conversation as humanly possible.” The former VP of Corporate Audit for Delta Air Lines added Edna Mode to her list of favorite superheroes. “My Delta team [in attendance], knows my original OG is Edna Mode from The Incredibles. She will look at you, tell you exactly what you need to hear. Then she will use her talents to bring out the best in everyone.”

The troubling issue of women not supporting women came up. “There aren’t as many jobs at the top,” said Brandi, “but what we have to realize it is so important to support one another because it’s the right thing to do. But also, the tables will turn.”

This demonstrates, companies are not doing enough. Said Aprio CEO, Managing Partner, Richard Kopelman, “We can never do enough. We just hired our first Chief Diversity Officer. We backed a program to attract minority students.” And he says their highest revenue producing offices are run by female leaders. Newell Brands Business Unit CEO of Home Appliances, Chris Robins said her CEO, Ravi Saligram, understands challenges faced by diverse groups saying he “came to the US with $20 in his pocket when he was 19. He’s created virtual Employee Resource Groups so everyone can participate, and employee engagement scores continue to go up.”

Despite such steps, a serious pay gap remains across industries. Women today earn 82 cents for every $1 men earn with no improvement from a year ago according to Payscale’s 2022 State of the Gender Pay Gap Report. Part of the solution said Brandi, is “salary transparency.” Even if your company doesn’t have it, speakers suggested “asking colleagues, ‘what do you think this person makes?’” And always have a relationship with a recruiting firm, and ask them as well. Brandi said we’ll be seeing new laws requiring pay transparency.

The day after the PINK event, New York City began requiring companies with at least four employees to include details on salary range and benefits in all job postings.

According to the National Women’s Law Center, since 2017, four other states require companies to share a pay range with job candidates at some point in the hiring process.

The PINK event speakers talked about the challenges faced by women who often want to be liked at work. Some studies indicate likability is more important for women than men when it comes to pay and opportunity. The leaders take? Said Brandi, “It’s not about are they going to like me. It’s about acceptance.” Said Chris, “As a leader I don’t need [people] to like me. I need them to respect me.” Julienne said, “I need to put my ego aside. What other people think of me is none of my business.”

And in terms of life balance—forget it. “I don’t think we ever have balance, but we can find harmony,” said Julienne. She blocks time off on her schedule to spend with her daughter, son and her husband too, “We’ve been together 28 years so I’d like to keep that going!”

All the speakers said success requires showing up and doing what you say you’ll do. It requires having people around you who you can trust and who will tell you honestly what you need to know. Another key to success said Brandi is “Tenacity.” For Richard, as a male leader, it was addressing what some thought was his tendency to be overly aggressive. “Some say I’m still a terrorist in my organization. One dragon [I had to slay] was to be vulnerable and channel my passion in a different way.” For Julia, it was getting over “being afraid of making a mistake; paralyzing perfectionism.” Courtney too acknowledged having to work through feeling like an imposter sometimes.

For Julienne, success has been about addressing her personal wellbeing. “I wasn’t taking care of myself at all. I created 5 non-negotiables: Daily rest, meditation, movement, hydration and nutrition. If I’m not focusing on my own wellbeing, I’m not of maximum service to myself or others.”

For Chris, it was moving into different roles to broaden her experience. “Up doesn’t always mean up. Think about the experience you’ll gain, the challenges you’ll take on.” She says having a coach helped her address self-doubt that held her back.

Julia said it’s “about being yourself, achieving what you want on your terms, in your way.”

And, while “The 9 to 5 is dead,” Julienne said, “and we all are enjoying that, advancing your career really does take being there in person.”

Julienne, who almost didn’t have that job she wanted, adds, “I’ve learned, no one is tapping on your shoulder. You have to raise your hand and feel confident in doing so.”

CHECK OUT THE EVENT PHOTO GALLERY HERE. Thanks to Larry Krupa for the great shots!

Check out the VIDEO HERE!

Thanks to those attending who helped PINK raise more than $1,300 for Helping Mamas, a Georgia nonprofit that provides essential baby supplies for families living in poverty.

Special thanks to West Paces Ace and ECL Atlanta for the centerpieces.

Details about the 2023 Signature Spring Empowerment Event will be announced soon.