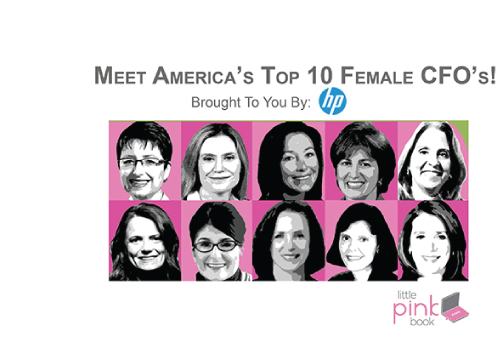 Finance – whether it’s personal finances or a career in finance – women tend to shy away from financial work. It’s comes as no surprise then, that of the top 100 companies on Fortune’s 2013 list, only nine are led by female CFOs.

With women holding less than 10 percent of these positions, PINK wants to know what makes these women different. What propelled these women to the top – what sets them apart?

And, who better to answer this question than America’s top 10 female CFOs?

These women managed approximately $890 billion in revenue during the 2012 fiscal year. Their qualifications speak for themselves, but it’s their personal experiences and varying backgrounds that reveal so much about their success.

“It wasn’t until I was in college that I determined I had an interest in finance,” says Carol Tomé, CFO and executive vice president of corporate services, The Home Depot. “I was a communications undergrad when I learned that no matter what business you are in, every business speaks the language of finance. I decided to get an MBA in Finance and make finance my career.”

Tomé believes her passion helped her rise to the top in a field where so few women do.

“I love what I do and have a passion for our business and our people,” she says. “Are these unique characteristics? No, but without passion I’m not sure that I would be where I am today.”

Tomé also credits the successful and intelligent team of people she surrounds herself with everyday. Regardless of whether she is working with men or women, however, Tomé says she retains her femininity by staying true to herself and refusing to assimilate.

Cathie Lesjak, executive vice president and CFO, Hewlett-Packard, chose a career in finance after exploring a variety of different interests.

“My career choice was never motivated by whether it was a more male dominated or female dominated field,” she says. “I knew what I wanted to do, and I went after it.”

Lesjak attributes her success to an analytical personality, her willingness to speak her mind and her decision to broaden her experiences by taking on a variety of roles throughout the course of her career.

“At about the halfway point of my career at HP, I received some invaluable advice from Bob Wayman, our previous CFO.  Bob encouraged me go out and get broader experience, outside of treasury and outside of headquarters,” says Lesjak. “There is an element of risk involved . . . but in my case it proved to be invaluable advice.”

Both Tomé and Lesjak believe that gender rarely hinders their success in the workplace, however a 2012 study by the American Economic Association revealed that men may enjoy an advantage on Wall Street.

“There was so much testosterone driven behavior in the room that I couldn’t get a word into the conversation.” Carol Tomé

According to the study, being a part of the “boys club” on Wall Street allows men to utilize connections to achieve success while women on Wall Street prove their worth through their performance records. Combined with the evidence presented by a recent Columbia University study, which found women have a more difficult time than men leveraging their accomplishments, we may be on to something.

So, how should women combat glass ceilings in a performance-based industry when they struggle to highlight their own successful performances?

Tomé suggests helping women build their own social network in the industry by surrounding yourself with other successful women with a proven track record of high-performance.

“ . . . Women in positions of power should make sure they surround themselves with equally powerful women.”

Similarly, Lesjak believes that becoming an expert in your field and finding an environment that challenges you and allows you to grow and excel in your career are keys to taking gender issues off the table for women in finance.

“Maybe that’s one of the pluses of working in finance – at its most fundamental level, it’s quite objective. You either know the numbers, and the facts behind them, or you don’t,” she says. “I refuse to acknowledge that I’m in a male-dominated field. That’s kind of irrelevant to me.”

“I do think it’s important that you find the right company and the right environment. You need to look for situations where the trends are favorable – where women are encouraged to compete and succeed,” she continues. “If that doesn’t exist, it’s probably time to consider a change.

“At HP I’ve never considered being a woman a handicap. I’ve never felt uncomfortable or disadvantaged, and that’s why I’ve stayed here for 27 years.”

Despite a generally positive experience in finance, both Tomé and Lesjak have come across various roadblocks in their careers based on their gender, which made them aware of their position as a minority in the field.

“Just last month I was in a business review with a group of men and the review got heated; there was so much testosterone driven behavior in the room that I couldn’t get a word into the conversation,” says Tomé.

“I thought that I might have to excuse myself, but instead, I just smiled and waited it out.  You see, I knew I had the upper hand.  They were seeking funding and approval from me,” she says, “which, by the way, they didn’t get.”

Lesjak also admits that, while few and far between, some unavoidable gender issues have arisen for her over the course of her career.

“The instances in which my gender creates an awkwardness or self-awareness are exceptionally rare,” says Lesjak.  “The only examples that I can think of are when I’ve travelled abroad to some of the offshore HP locations, where local customs and conditions for women can be very different.”

While managing the financial health of a Fortune 100 company may seem like an overwhelming task, Tomé and Lesjak agree that their jobs are challenging but also very rewarding. Each maintain a healthy balance in their personal and professional lives.

To women who are interested in finance but are intimidated by the possibility of gender issues, Lesjak encourages them to work hard to overcome any gender issues they may encounter in order to pursue their dream career.

“Being technically proficient is important, but how you present yourself can help you stand out from the crowd and really give your career a boost,” Lesjak says.  “It may be that men have that presence more than women, but [that just means] women need to work at it more.”

See who else joins Tomé and Lesjak on PINK’s list of America’s Top 10 Female CFOs. See the slideshow below for the full list.