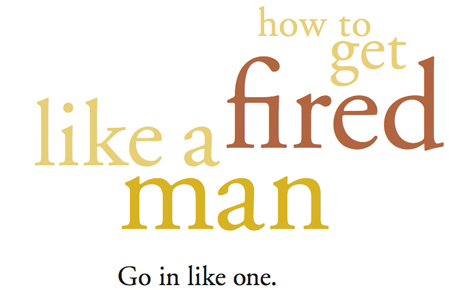 How To Get Fired Like a Man May 20, 2013Career ArticlesOff

Carly Fiorina did. Forced out of her Hewlett-Packard CEO role, America’s most powerful businesswoman walked away with a severance package totaling more than $21 million, plus millions more in stock options, salary, and bonuses. She’s not the only savvy female business leader packing a golden parachute. Edna Morris negotiated a rich bounty before taking the helm as president of America’s largest seafood restaurant chain, Red Lobster. After the Orlando, Florida-based company hit rough seas, she was forced to abandon ship. While other women might have lost their bearings, Morris, now executive director of the James Beard Foundation, tells PINK her financial package allowed her to float for months while she considered her next move.

“You owe it to yourself to negotiate an appropriate package,” says Morris. “It enables you to move forward to find exciting possibilities where you can make the difference you want to make in the world.”

But, sadly, when many female executives leave their posts, they walk away without pack- ages. Their male counterparts, however, more often fly out the door with golden parachutes. When men leave due to a merger or bankruptcy, or even are fired for lack of performance, they often take with them a sizable check – sometimes worth millions of dollars. This final paycheck – frequently consisting of stock options, bonuses, severance pay, and some- times even the use of an office and secretary – softens the blow of losing a big job with significant pay. Morris says simply, “Severance packages are designed to help an executive transition while seeking new opportunities.” In fact, para and chute come from the Latin words for “protect” and “fall,” so parachute literally means pro- tecting yourself from the fall.

Published reports detail specifics of golden parachutes en- joyed by so many men. Take Ed Meyer, founder of Grey Glo- bal Group, a worldwide marketing and advertising firm, bought by a larger one. He left, landing softly with $87 million in his pocket and even his job intact. Only now, he makes a pid- dling $1 million per year instead of $3.5 million. Those cash payments don’t include Meyer’s stock options worth in excess of $350 million. When Michael Ovitz, Disney Co.’s second in charge, was forced out after serving as president for 14 months, he walked away with a $140 million package. Men have been bailing with golden parachutes for ages.

So why is it that our country’s professional women usually have trouble negotiating these mega packages? The answer? Top women who have run Fortune 1000 companies say women do get what they ask for. But far too often, they don’t ask for enough or don’t ask at all.

Why Women Don’t Get It

Top female executives who’ve experienced this personally or witnessed other women making the same mistakes suggest there are three perspectives that keep women from larger exit packages, which ideally should be negotiated before one actu- ally takes the job. There are the “I don’t knows,” women un- aware of opportunities and their rights; the “I don’t asks,” women who think asking will jeopardize getting the job; and the “I don’t boasts,” women who feel it is impolite to spot- light their accomplishments.

The “I DON’T KNOWS” don’t know that getting a big package going out depends on your packaging going in. “I don’t knows” are often found within the ranks of women just beginning their careers. “Many young women are often naÃ¯ve when they enter the job market,” concedes Cheryl Bachelder, former president and chief concept officer of KFC, now an executive coach and consultant in Michigan. She received what amounted to chicken feed at first. “I was a terrible nego- tiator early in my career,” admits Bachelder. She believes too many women think that hard work alone will ensure they’ll get a good package when they leave. “I always just assumed that I’d be treated fairly and I was just going to work hard and they’d pay me fine.”

When women give their employers the benefit of the doubt on day one, it is doubtful they will see the benefits due when their days are up.

Caught up in the magic moment of “my first job,” these neophytes forget that what they don’t say now might hurt them later. Rhonda Parish, executive vice president of The Denny’s Corporation, based in South Carolina, warns, “Do not wait until leaving the company to make sure you haven’t left any- thing on the table. Negotiate your severance packages as you are initially working with the company to finalize your salary and other terms of your employment.”

New York City-based talent agent Bonnie Lunt, known to many as the Jerry Maguire of the communications industry, has seen otherwise savvy women make plenty of mistakes. Her search firm, Bonnie Lunt Management, has placed hun- dreds of women in senior-level positions and has negotiated their severance packages. “Women have men working for them who have better packages than they do,” says Lunt. She refers to one high-level woman in advertising who didn’t do her homework to research what her counterparts were earning. The result: The top-level woman came on board for a fraction of what the guy she supervises earns.

The “I DON’T BOAST” women forgo bigger benefits packages because they feel like braggarts when they tout their achievements. “[The ‘I don’t boast’] women have a tendency to think they should not ask for things and they should not point out their accomplishments,” says Parish. “Humility is a wonderful attribute. Every company wants their employees to throw themselves into their work, but if your company is not aware of your specific achievements, you become dispensable. You can save yourself the emotional and financial aggrava- tion by speaking up now.”

In this “you are what you ask for” – and “you are what you say you do” – world, men get what they want. Women take what they can get. “Women are their own worst enemies,” says Kathy McGinnis, former executive vice president of human resources for Wendy’s International, based in Ohio. Why would an accom- plished executive not tout her spoils? Apparently because she doesn’t want to spoil a good thing. “Women tend to be accommodators, looking for how to find win-win solutions,” says McGinnis. “They don’t enjoy conflict or an adversarial approach. If men do battle, it’s seen as aggressive. When women do the same, it’s seen as bitchy.”

The “I DON’T ASKS” are those who just don’t ask for what they want or deserve. “It’s not part of their repertoire,” says Jane Melvin, former Olive Garden Restaurant senior exec- utive vice president, turned nationally recognized consultant and president of Strategic Innovations Group, based just out- side of Chicago. She says asking for what one wants often doesn’t come naturally to many women. It didn’t come natu- rally to her. “Our jobs as mothers are not to ask, but to do. I have never asked for a raise in my life.” Since women in top- level executive positions remain a rarity, “we often take what we can get. We compromise instead of negotiating,” says Melvin. She adds, “Not negotiating compromises yourself and your future.”

McGinnis says, at Wendy’s, she noticed women in lower- level positions were hit even harder by this fear of speaking up on their own behalf. “Below the senior-level executive, when people are terminated, men were more likely to ask for more, to push for more, to fight for more than women, who tended to accept company policy.”

Yeaney has plenty of company. As Morris puts it, “A high- er majority of women accept whatever is presented.” What that means, according to Women Don’t Ask: Negotiation and the Gender Divide (Princeton University Press, 2003) by Linda Babcock and Sara Laschever, is that women lose nearly $500,000 by age 60 due to fear of salary negotiations, while 20 percent never negotiate at all.

Not only do women not ask – sometimes they won’t even let others ask for them. Some female clients have encouraged Lunt not to negotiate more on their behalf. They’re just happy to have a big job. Lunt says they say, “Back off. I don’t want you to push that hard. I want this job.” So how do you get the boot and the booty?

The best way to get fired like a man is to get hired like one. That means knowing the market value of the position so that you can position yourself from the start. Packing your para- chute entails negotiating the best severance package possible. This should happen as salary and benefits are negotiated too, ideally before you even take the job.

“You’re better able to negotiate when you are in the inter- view or applicant process,” says McGinnis. The best way to take a job without being taken for granted is to know, boast, and always ask for what you want.

Potential hires have a right to know. Know the company’s policies before you sit down and negotiate. And do some homework in advance. “Review public filings, if the company is publicly traded, to determine what might be reported about severance packages given to and/or paid out to others,” says Parish. “Ask human resources to confirm to you in writing that your severance would be at least equal to other similarly situated employees.” Or, adds Lunt, “They can ask the search firm to see what other principals are earning, and a if there will be people reporting to them with bigger salaries.” Ask the current employer about the benefits offered and ask for it in writing. Morris adds, “Women need both the capability and confidence to negotiate an appropriate pack- age; be aggressive in knowing what is reasonable and fair, get help in knowing how to negotiate, and do it.”

Remember it’s OK to brag a bit. Aggressive companies like passionate players. Spotlight work you’ve done in the past: awards received, sales made, and other effective initiatives. Talk about how past accomplishments will benefit the com- pany you’re talking to now.

Some self-promotion along with knowledge will put you in a position to ask for the package you want and deserve. Be- sides, it sets a precedent other top female employees will ben- efit from in the future. After all, asking for what you want is free. As Melvin puts it, “Don’t be shy – we have a responsibility to the sisterhood.”