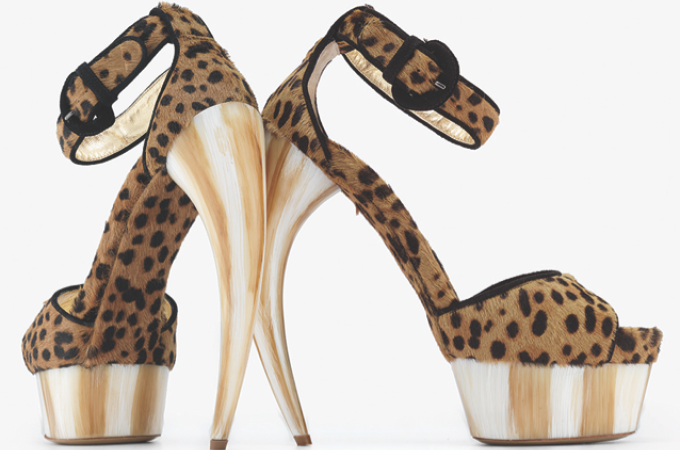 Killer heels. Are they a godsend for ambitious women or a sentence to walk around the workplace in discomfort?

The heights from heels give women an extra confidence boost in the boardroom. So that got us interested. Now through December 13th at the Palm Springs Art Museum, there is an exhibit on Killer Heels: The Art of the High-Heeled Shoe. The exhibit displays shoes ranging from the 16th century Venetian platforms, to 19th century Chinese slippers for bound feet, to present day high fashion heels from extravagant designers.

Studies show, wearing heels leads to standing up straighter, and adding an extra spring in every step. Whether it’s wedges, stilettos or platforms, heels are more than just a pair of shoes. They make a statement about who we are and where we are going. Depending on the high heel, they may also be a work of art, adopted as a symbol of affluence and status. This has been the case with the very first high heel when heels kept the person wearing them higher off the ground and often servants would be needed to transport them.

Even today, a shoe “reflects the culture you come out of, the social values that are placed on style,” says Mara Gladstone, assistant curator of the Palm Springs Arts Museum.

Why were high heels the chosen product of the exhibit? Mara tells PINK, “everyone loves shoes and everyone wears shoe, it’s a fun exhibition.” Mara’s favorite pair of shoes from the exhibit is the 1937 Salvatore Ferragamo rainbow platform. An iconic pair of shoes that is both beautiful and stylish, but also practical enough that the heels themselves are still being made today, only with more monochromatic styles.

Also Mara adds, “there’s a bit of levity in the general concept of the exhibition, which focuses on the history of the heeled shoe over several hundred years and across cultures.”

Interestingly enough, high heels were initially made for men. Originally from Persia, warriors on horseback used heels to help them stay in their stirrups. European men then adopted heels as hunting fashion; having their heels stained with red was a sign of success. Later on, heels were adopted by women and associated with “femininity, irrationality and lack of functionality.” However, Mara says these days, women have shifted that ideology wearing heels as sign of taking control of their lives and expressing who they are.

PINK CEO Cynthia Good, in Palm Springs for the exhibit was fascinated. “I didn’t realize men were the first to wear heels. Maybe that will make a comeback?!” She says it’s great to see women in the workplace expressing their individuality, having some fun in the name of art fashion and whimsy in addition to heels adding confidence. Good says in her own life she is rarely willing to “trade fashion and power for comfort.”

But confidence at work is essential. And Cynthia and others know, that doesn’t come from footwear. Whether you are in 6-inch stilettos or ballet flats, wedges or oxfords, confidence comes from within. As long as you believe in your capacity to succeed, you have the ability to command a boardroom.

“The higher the better. It’s more about an attitude. High heels empower women in a way.” Christian Louboutin