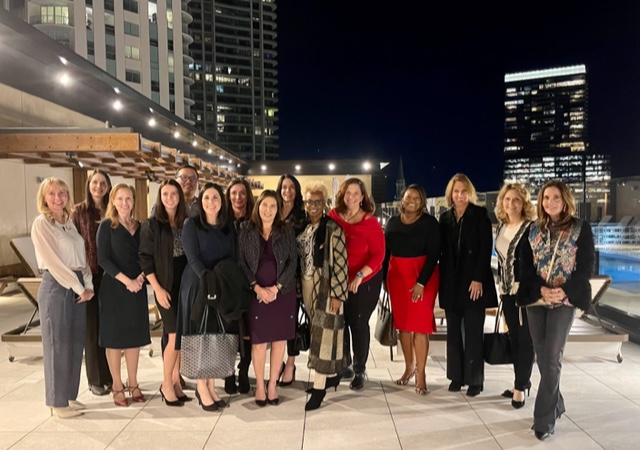 Some of America’s top women business leaders gathered over leche martinis, black cod and tiradito recently to connect with other women influencers, and to check out the newest hotspot—the just opened Nobu Atlanta. For many, it was the first women’s gathering since Covid. Post-Thanksgiving, The Coca-Cola Company’s Chief Sustainability Officer Beatriz Perez; Equifax Chief Strategy and Marketing Officer Julia Houston; Porsche North America Corporate Counsel Chelsea Dennis; Huddle House EVP and General Counsel Melissa Rothring; EY Managing Director Chevy Arnold; Cox Enterprises Chief Legal Counsel Jennifer Hightower and many others talked about gratitude, and how it spills into work, their evolving leadership styles, and grooming the next generation of leaders.

Thanks to Jackson Lewis and Nobu. Also, special thanks to Sally Williamson. Her coaching practice keeps her close to the pulse of leadership and the trends that all leaders are focused on for the year ahead.  I wanted to share her recent newsletter on 2023 priorities for peak career leaders.

For me it was a very special, heartwarming evening, and I have heard from a number of the women leaders attending, that they felt the same. We had the chance to be together, enjoy a nice meal, meaningful conversation, and revel in each other’s presence. Such a rare and powerful thing.

Jackson Lewis Shareholder Tracie Maurer talked about how the strong women in her family paved the way for her to be powerful in her own right, and now to give that back. Warner Media Assistant General Counsel, Kelly MacLanahan said she’s grateful for women she’s seen being unkind to each other, since this provided a powerful lesson of what not to do. And Roark Capital Chief Legal Officer, Claudia Levitas, who has worked in legal departments at Huddle House and Hooters, said she is grateful that the male leaders she’s worked with always treated her with respect. And Chelsea Dennis talked about the silver linings of Covid, which have included, “not feeling guilty saying I need to pick up my kids. I don’t have to sneak out of the office.” Cox Media Group, VP HR Business Practices Catherine Jefferson thanked PINK’s CEO Cynthia Good for inspiring a “beautiful career and a beautiful life” for so many. Verizon Connect VP and Deputy General Counsel, Kendall Butterworth expressed thanks for those who presume positive intentions. Melissa Rothring said she is thankful for her supportive team, colleagues and family, while Jackson Lewis’ Adriana Midence expressed thanks for how far we’ve come.

Prior to dinner at the world famous Nobu restaurant, we toured the attached hotel, the stunning curtained lobby, elegant ballroom next to a porch overlooking the nighttime city skyline, the top floor pool and suites, “I could live here! I’d like to live here,” quipped one C-Suite executive.

But the best part was the conversation between women at the highest levels of business, many of whom knew each other from being on leadership panels, but especially lately, haven’t had much chance to properly connect. “Last night was wonderful. I really needed it,” said Renita Mathis, Director of Special Projects and Strategic Initiatives, Office of the President, Spelman College.

P.S. Since some of you asked, Cynthia’s jacket, was designed by Ade by Femi