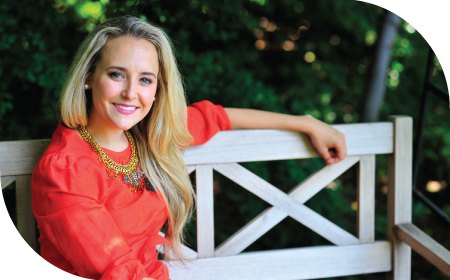 Zig When Everyone Zags

Despite launching her company during the recession, she was able to secure $19 million in funding last year. What’s more, von Tobel dropped out of Harvard Business School to make the leap. She says perseverance paid off – after five months of meeting an investor who refused her idea every time, she finally won out, securing $1.1 million in seed capital alone.

In our exclusive interview, she tells why budgeting is a necessity – not a luxury for women, why she doesn’t let her age faze her, and why her life’s motto is: “Get up, dress up and show up.”

Little Pink Book: What’s your biggest weakness as a leader?
Alexa von Tobel: I’m impatient. I don’t think you get to be a startup entrepreneur by being patient, because it is the flip side of what also makes you great as an entrepreneur. It’s all about the power of now. I do things now. I don’t want until tomorrow to get things done. I get them done today. That’s a real focus of mine: ‘don’t put off for tomorrow what can be done today.’ I’m also impatient because I believe we can make progress faster. It’s a double-edged sword. I think it’s a great strength but at the same time it can be a big weakness.

LPB: When has perseverance paid off for you?
AvT: It took me literally five months to get one of the investors in our seed round to invest. They did everything in their power to say no. I was just unwilling to accept it. Ultimately I got them to invest and they took on a bigger investment later on. Everyone else said, “why are we even going to this meeting? It’s just not going to happen.” And I thought: “Well, you never know. Let’s stay focused. Let’s give them our best and let’s see what happens.” It ended up turning out really, really well.

LPB: What’s your success secret?
AvT: When everyone zigs, you have to zag. When everyone is being safe, it’s time for you to be bold. When everyone’s being bold, it’s time for you to be thoughtful. I dropped out of Harvard Business School in the heart of the worst recession. Everyone was worried and being more conservative. It’s at those times that it’s important to do something bold. It taught me the best discipline on how to start a company. And now times are getting better, the company is able to take advantage of that. You have to plan timing as much as you can.

LPB: What do you think is the biggest concern for professional women right now?
AvT: Taking more risks. Fear holds us back just in general. Get comfortable asking for raises, asking for more responsibility, asking for a part of your career you want to take charge of. Literally, putting your neck out there. If you’re not nervous every day, a little bit, then you’re not pushing yourself. My New Year’s Resolution was: ‘Get up, dress up, and show up.’ Get up on time, dress up every day, and show up with a smile. Do that every day – half of life is just showing up on time.

LPB: What was it like being a woman in finance?
AvT: I’ve never focused on that. All I’ve focused on is the idea. Most of life can be a meritocracy if you are more prepared, you work harder, you’re more informed, smarter than the next person. It doesn’t matter if you’re young, old, male, female, rich, poor, educated or not. It’s all about hard work, being more prepared than the next person, and being more informed.

LPB: What were your biggest career obstacles?
AvT: Working around the clock, I get sick all of the time. I rarely get enough sleep. So taking good care of myself is something that I really focus on. Other obstacles were starting a company in a recession. It’s hard. I never want to tell people this is easy – I don’t want to make it look so easy because it’s not! Perseverance is one of the best qualities. If you really set your mind to something, and focus on it, I think you’re going to get there.

LPB: Life/Work balance – how do you achieve it?
AvT: With major difficulty. I never pretend this is easy. My office is two blocks from my apartment, which helps a lot. Next, I schedule everything, not even exaggerating – everything to the 10 minutes. I schedule time to go through emails, time to think, an hour to just strategize – clear space. The more you organize your time and prioritize, you can focus on things that are the biggest priority. I also eat all my meals at the office. I bring breakfast and lunch every day. I don’t take breaks – that way when I’m here, I’m here.

LPB: You have a team of 60. How do you hire?
AvT: Obviously they need to be smart, good people. But the real skill I always look for in people is ‘outsized.’ They have a greater amount, an outsized amount of perseverance and belief. [Those who] are going to change the world, move the meter, are people who just believe. They say: “We will find a way to make it work.” People who will not take ‘no’ for an answer. Doing something different is not looking at something someone did, yesterday. That’s finding the easy way out. Changing the game requires belief and perseverance.

LPB: What are your personal finance tips for women?
AvT: Everyone needs help with personal finance and LearnVest talks to all people – women and men of all ages. The most valuable thing any career woman could do is to get a financial plan. You need to sit down and actually come up with a financial plan of what you want to achieve in your life and how you’re going to get there. Do you want to buy a home? How are you getting there financially? Because guess what – that’s what your career is all about!

LPB: Is there a personal goal you feel like you haven’t achieved yet?
AvT: Tons! At one point I want to live in France for at least six months or a year and brush up on my French, and actually spend six months reading every book that I haven’t been able to read because I’ve been working so much. I’d love nothing more than just travelling to any country with no schedule and figuring things out on the go. I really am an adventurer.

LPB: What’s your favorite place that you’ve visited?
AvT: Bhutan. I wrote my senior thesis in Bhutan – the tiny country between China and India. The first thesis at Harvard on Bhutan.

LPB: How do you define success?
AvT: I define success by loving what you do, and feeling like you’re actually using your God-given talents to the fullest. And making a difference in whatever way that means to you.

LPB: But is it possible to always love what you do, especially in this economy?
AvT: No, it’s not always possible. It’s a real luxury. My mom once said to me, “if you love what you do, you’re never going to work a day in your whole life.” But I don’t think that comes easily. So I think it’s about finding out what you really love – having enough real personal knowledge of yourself to be able to figure that out.

LPB: What kind of legacy do you intend to leave?
AvT: I want my company to be the one that makes financial planning and getting access to an expert for millions of Americans easier, because I think we can change their lives. And I’m not going to stop until we figure that out. My personal motto is, “financial planning should not be a luxury, it should be accessible to every American.”