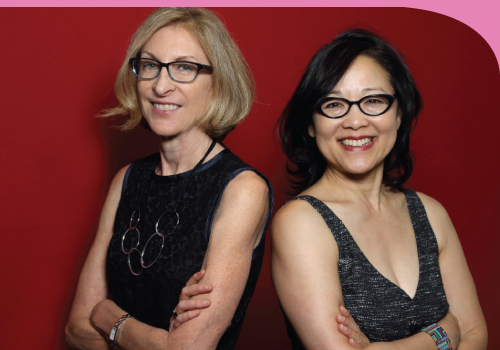 Many of today’s seasoned leaders are launching new ventures, too.

Just ask Patricia Lee-Hoffman, the founder and former CEO of Triage Consulting, who, with venture backing, recently cofounded Flutter Eyewear – a Warby Parker  of sorts for ladies of a certain maturity.

“I stepped down as the CEO to bring others up behind me,” she tells PINK of her decision to leave the Triage’s day-to-day operations.

The Baby Boomer has a reputation for putting her employees’ best interest first. For the past decade, Triage has been consistently named one of the best places to work in America.

So, it’s no surprise that when Lee-Hoffman came calling, former employees – now working for tech giants like Facebook and Google – leapt at the opportunity to pay it forward.

“Several of the people who helped me were people who used to work for me,” she says, “much younger than me,” proving thoughtful leadership pays off.

And the importance of a diverse network, as Lee-Hoffman’s older set of connections also played a significant role in launching a startup sans the burden of fundraising.

Prior to launch, during the creative process, she invited women from she and cofounder, Gayle Hayworth’s, network to fit parties – where they tried on the various styles.

“It came with unplanned but happy consequences,” says Lee-Hoffman. The women began sharing news of the startup with friends and business associates, some of which turned out to be venture capitalists.

“We had hundreds of fans before the product was even manufactured,” she recalls, “Women were bugging us for a pair.”

The VCs were calling, too.

While location certainly plays a part in access, the 58 year-old also credits much of the company’s initial success to the perks of age: more time to build a larger network and make mistakes.

“There is a biological reason for pain; it’s so you don’t repeat the same thing,” she quips. “I don’t think we’ve made a single misstep so far, because we made those in our 30’s and 40’s.”

And, no, you’ll never catch her around the office in flip flips or a hoodie.

Did you start a new business later in life? Tell us!

“Time has a wonderful way of showing us what really matters.” Margaret Peters