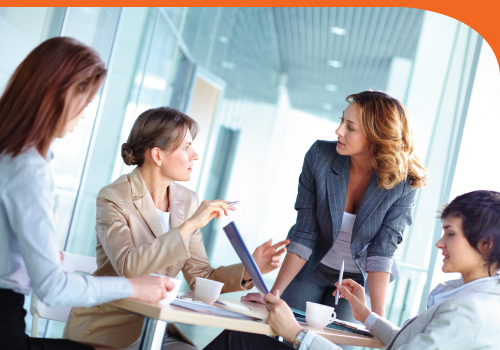 That’s the personal motto of Jenn Harris, founder of High Heel Golfer, a San Diego based company that teaches women how to play golf and use the game to benefit their careers.

According to a recent study by The Economist, bosses who don’t play golf earn 17 percent less in pay, on average, than those who do.

Golf requires players to self-police and remain composed under pressure. It enables executives to assess the character of rising stars in their company or get to know prospective clients.

Harris credits her own success to the relationships she built on the golf course.

Harris was working at a defense contracting company in DC when she asked her boss if she could participate in a company golf tournament. He responded, “Oh you won’t know how to interact with all the government people.”

After that, Harris began playing on the weekends with colleagues and clients.

Because of the strong relationships she cultivated on the course, she kept her job after projects were completed – very rare in the defense contracting business.

“In golf you can cheat but you’re not supposed to, it’s the same if you move the ball an inch or a mile,” she says.

Has talking shop on the golf course helped your career?

“I don’t mind living in a man’s world as long as I can be a woman in it.” Marilyn Monroe