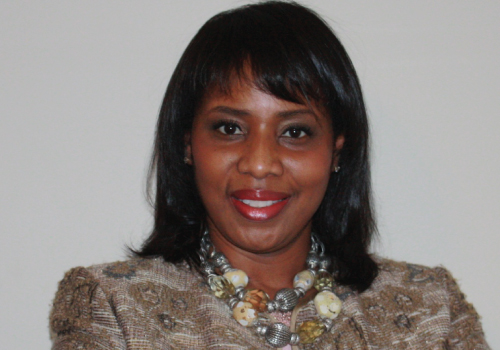 It’s Friday afternoon; a winter storm is on its way. She walks in, standing about five foot eleven.

She orders a glass of red wine; leans in and, with ease, begins to share her journey to the top. She recalls being an ambitious, young Wall Street analyst getting her chance to chat with one of the world’s most successful female portfolio managers at the time.

As the woman listed every training and certification program under the sun, Kimberly-Clark’s B2B Global Procurement Leader Angela Thomas-Anderson remembers smiling and thinking: “Self, if I listen to this lady, I’ll never get anywhere.”

Instead, she charted a less-than-traditional path up the corporate ladder on her own terms.

After three and a half years of 19-hour workdays, Thomas-Anderson left her analyst position at JP Morgan and began grant and contract management for CARE International. She soon found herself negotiating with foreign governments and organizations, including the United Nations, and traveling the world.

During the 1996 Olympics, she served the International Olympic Committee as the envoy for Senegal. Unlike athletes from developed nations, the Senegalese did not have access to private planes and fine dining.

“It opened my eyes a lot,” says Thomas-Anderson. “Just getting uniforms was a big deal for the team.”

That’s why she brought the team to her home one day, and prepared a meal for the team to eat with her and her family.

Throughout the years, Thomas-Anderson has gained experience in nearly every industry vertical – working as Vice President of Diversity at Spherion and strategizing for Dell’s global supply chain.

“When I look at my career, its one lineage of the same thread,” says Thomas-Anderson. “Everything is connected.”

The forum brought together global procurement thought-leadership for the development and identification of worldwide initiatives that contributed to transformational cost management and value creation for Kimberly-Clark’s Global Non-Wovens, Healthcare, Professional, and Sustainability operations.

And, that’s why she thinks her broad-bench skill set is just what corporate Boards are missing.

“They’re always comprised of bankers, lawyers, sales executives. Very seldom is there someone from global supply chain,” she notes. “We need to institutionalize the knowledge of how and what sustains business growth, and strategic supply chain practices can certainly do that.”

Thomas-Anderson has served on several nonprofit boards and committees, including the Georgia Governor’s Workforce Board, and, with $3 billion of responsibility on her plate, says she’s ready for a corporate appointment.

“[It’s] my Godly purpose to get people to understand connectivity,” she says. “The connections are already there. We just have to see them.”

The Lansing, Michigan native sat down with Little PINK Book to share her perspective on life, family, career and what it’s like to be one of a handful of African American women topping the ranks of corporate America.

Little PINK Book: What do you think has been the greater barrier in your career, being black or being a woman?
Angela Thomas-Anderson: Being black, definitely. It’s been a differentiator. Sometimes you don’t want to be different, and it can be lonely and frustrating. I’m not some rare bird; it doesn’t have to be that way.

LPB: There a must be a strong lack of minority practitioners in your field representation in your industry?
ATA: Yes. There aren’t many women, period. And, there really aren’t any African-American women. In fact, there are very few African Americans in strategic, executive leadership roles – certainly a handful in the whole country.

LPB: You’re ready for the next big step – to join a corporate Board. How has your experience been with the nonprofits you’ve worked with?
ATA: I currently serve on the Governor’s Workforce Development Board, which [helps bring] businesses to Georgia and ensures they have a capable workforce. We are funding unsung local heroes. The work they’re doing is amazing, particularly with youth. College isn’t for everyone, but everyone needs transferrable and transportable skills. These organizations are doing things like providing foster care children with job training programs to gain the skills and experience necessary to change their lives! Serving now as the board chair, and as a director has been one of the most enriching experiences.

LPB: You also volunteer at a hospice for end of life care. Where does your spirit of giving back come from?

LPB: How do you deal with fear?
ATA: If you’re afraid of something, you should just heed to it. Before volunteering at the hospice, one of the things I was afraid of was death.

Initially, I was afraid of volunteering at the hospice; but, after sitting down with a 94 year old woman with acute respiratory failure, I experienced the peace she had. She was OK. I remember sitting with her as she rested, peacefully. Her family came bursting into the room to visit, suddenly awakening her! In that moment, I realized how much we impose ourselves onto other people without regard for what they want. They could have waited. Waking her up wasn’t for her; it was for them.

LPB: What’s your biggest weakness as a leader?
ATA: Really, really listening! Sometimes I start talking, assuming my team understands the foundation I’m coming from and I may lose them. I have to lay down the foundation and then move to the next level without assumption. I’ve blown past a lot of people and that’s not productive. If I understood these basics 10 years ago, that people have to truly hear to understand what you are saying, I’d be much further ahead.

LPB: You’ve been married for nearly 20 years. You’re a mom of two. And, you have two dogs – a golden doodle and a chocolate lab. Any surprises?
ATA: I auditioned for a reality show.

LPB: Really? Which one?
ATA: I was one of the 24 finalists for the first season of The Next Food Network Star.

LPB: So, you’re a chef?
ATA: Sort of. I’m better with food than desserts. I make really awesome bruschetta and frittata. I love to have people over and host teas and brunches. I try to do it at least once every quarter.

LPB: You were also a pageant queen.
ATA: Yes, I competed in pageants when I was younger.

LPB: Glitz pageants, like Honey Boo Boo?
ATA: Oh, no. They weren’t like that then. But, I actually missed my senior prom to compete in the Michigan Junior Miss pageant.

The prize money helped pay for my first semester of out-of-state tuition at Howard University.

LPB: What type of legacy do you hope to leave?
ATA: I want to help create more spaces around what’s right with the world. We already know what’s wrong. I want to see more of the things moving our human selves forward instead of what’s pulling us back.